One of the most popular tourist attractions in Macau, Barra Fort was completed in 1629. It successfully protected the bar at the entrance to the Inner Harbour against the Dutch in 1622. Such credit was given to the fort, that between the 17th and 18th centuries, the commander of the fort was chosen directly by the king of Portugal and was not under the orders of the Macau governor or the captain general.

The fort was known as a small town, it was built into the hills on the tip of the peninsula. There is a guardhouse and six 24-pound cannons on the higher up the hill, while at ground level were stores for ammunitions and supplies, as well as a large house. 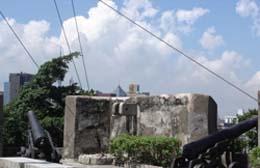 A chapel was built in the fort in 1740, which dedicated to St. James (S. Tiago), patron saint of the military. According to the legend that the saint's statue would patrol the fort at night and have mud on his boots in the morning, so a soldier was detailed to clean them. It is said that on one occasion the soldier failed to do so and was hit on the head by St. James' sword.

The fort's cannons were never needed after 1622, until World War two when they were sold for rice to feed refugees from Hong Kong and China. Over the years the fort was gradually demolished to make room for roads and by 1976 it was abandoned by the Marine Police. The Tourist Office of Macau Government decided to turn the ruins into a Portuguese inn, now is one of the Macau's great attractions, where tourists will discover how the architect used the original walls, made the cistern into a fountain, incorporated century-old trees into the design and restored the chapel, etc.