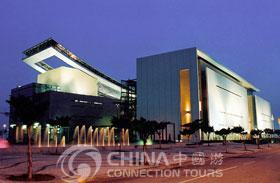 The museum is located more or less on the spot where the first Portuguese landed, to find a temple dedicated to Taoist goddess of the sea A-Ma. The place was called A-Ma Hau, "place of A-Ma", which became Macau. Maritime Museum, located just opposite the A-Ma Temple, has been extraordinarily well laid out. Macau used to be a world famous seaport until early this century when Hong Kong replaced its role. This museum commemorates Macau's maritime history. The museum not only covers Macau's long history at sea, but maritime history from around the world. Beside the maritime history, visitors can also enjoy the miniature aquarium and the boat ride around the inner harbor.

The main gallery on the ground floor is devoted to the life and work of fishing communities in South China. The mezzanine level is a wall showing models of 12 traditional Portuguese boats. Above each is a screen that shows a video about the boat. The second level focuses on the great voyages of discovery.

At Wharf Number One are more exhibits - a boat used in the annual Dragon Boat races, a nautical astrolabe and old rickshaw. The huge Dragon Boat on display is particularly fun. Along the wall is a display of boats, including a cormorant-fishing boat from Southern China, a Vietnamese circular fishing boat and a wooden racing yawl.

Even if you are not obsessed with boats and nautical history, it is interesting to see the tropical looking boats which coloured Macau's past. From flower boats to fishing boats to dragon boats, each vessel tells a story about the enclave's culture. Outside, for around MOP20, a junk will show you half an hour's worth of a different Macau from the water.

The proposal to create a Maritime Museum in Macau was launched in 1986 by Commander Ant nio Martins Soares who, at that time, was the Macau Harbour Master. A beautiful, old house situated in the Largo do Pagode da Barra was modified to accommodate all the exhibits of the Museum. This building was inaugurated in 1987 and from the beginning, was well-received by the public.

However, because of various donations and the acquisition of new objects, it was necessary to consider a move to new and more spacious premises. For this reason, a new building was erected for the purpose and was inaugurated on 24 June 1990, thus allowing for new thematic areas. The architectural fa de of the Museum gives the viewer an impression of a stylized vessel.

This new building is located near the river, in the same square as the original house, (now used for the Museum offices) and at the side of the Temple of -M the protector Goddess of the fishermen.