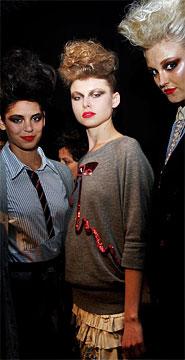 A New Zealand fashion designer has been forced to pull a top from her latest collection after it was revealed to be almost identical to one currently for sale in the London high street store Topshop.

Trelise Cooper, whose clothes have previously been snapped up by Hollywood stars such as Julia Roberts, unveiled her Fall 2010 collection at New Zealand fashion week last Wednesday. However keen fashion observers noticed one item – a grey jersey top with pink sequined bow detailing – was a little too familiar.

The piece bears a striking resemblance to a jumper produced by London-based German designer Markus Lupfer for his range in Topshop, which went on sale in July.

The sequin jumper by Mr Lupfer, who is known for his signature glam-rock chic jumpers with sequined lips, kisses, bows and hearts, is still on sale at Topshop for £85.00.

Ms Cooper said she had never seen Mr Lupfer’s jumper before. The designer said she had sourced the unique sequin bow embroidery from her usual knitwear supplier in China and had received her completed piece back from production in July. She told a New Zealand newspaper that she had documentary proof of her chain of supply to back up her claims.

Ms Cooper, whose company has an annual turnover in excess of $NZ15 million (£7 million), said she was “devastated”. “I didn’t even know it was in Topshop,” she told the NZ Herald.

Alex Brandon, chief executive officer of the Trelise Cooper Group, told The Times that they suspected the supplier had sold the sequin embroidery twice to the two designers, and would conduct an investigation into how it could happen.

He said that as soon as the company had been made aware of the similarities they pulled their top from the range.

“From our point of view we were shown this particular bow from one of our suppliers and Trelise and her design team incorporated it into their own designs,” Mr Brandon said. “When it was pointed out to us that it was very similar to one available in Topshop, we immediately pulled it from our collection. It will now not be manufactured or sold.”

He said he was not sure if the company would pursue any legal action.

Ms Cooper has had intellectual property disputes in the past. In 2005 she challenged New Zealand accessories designer Tasmin Cooper over breach of copyright for trade marking the name Cooper. After a 20-month legal battle the matter was eventually settled out of court.

Mr Lupfer and Topshop could not be reached for comment.