A chilly market has drawn newly launched housing projects in Beijing into a deep freeze, with several seeing no sales so far this month.

A mere eight residential projects were launched in June, and, of those, five have yet to make any sales as of Tuesday, according to the Beijing Real Estate Transaction and Management Website.

The projects offered 2,546 housing units across the capital, but only 31 apartments were sold in the first three weeks of June, accounting for 1.2 percent of the total available.

The situation is in striking contrast to the same period last year, when house shoppers lined in long queues and snapped up hundreds of apartments on the same day they were put on the market.

"If we compare World Cup teams to the Chinese real estate market, we would say the performance of China's property market is as lousy as the French football team. It's freezing." Yang Shaofeng, general manager of Beijing Lianda Sifang Property Agency, wrote on a blog. 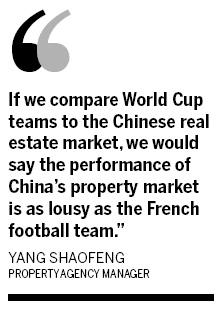 He cited tough government policies issued recently, along with pressure on real estate developers to cool prices as major reasons for the sagging transaction volume in the Beijing housing market.

"It is unlikely that we will see housing prices rebound by the first quarter of 2011," Yang predicted. "Within one month, it is likely that some properties will offer major price cuts in Beijing."

Local media have reported that about 75 property projects in the capital are now offering discounts. The reports suggest that a larger-scale drop in home prices may be in store during the second half of the year.

"For example, in 2008, China Vanke Co aroused the anger of apartment owners by lowering prices. People thought it was unfair to pay more money to buy a similar property, just because they chose a wrong buying time."

"At present, we are seeing developers in Beijing adopt a more cunning way: They offer discounts, send gifts or waive property management fees, instead of cutting the price directly," Xie said.

Xie predicted apartment prices will decline 10 to 15 percent in the following six months to a year.

Only 13,545 pre-owned houses were sold in May, 59 percent fewer than during the previous month.

The average price sank 4 percent in May. The hardest-hit areas were Wangjing, Majiabao and Tongzhou, where prices dropped more than 10 percent.