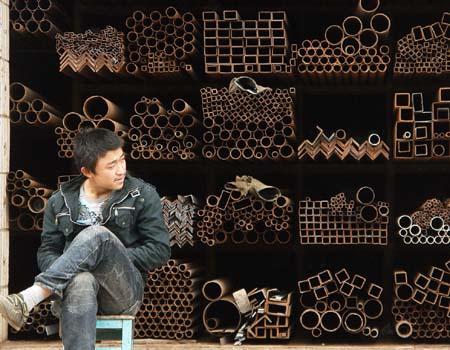 A vendor at Zhengzhou Steel Market. Average steel prices in China are now at their highest point since August 2009, rising by 15 percent over the last month. Ma Jian / for China Daily

BEIJING: China's third- largest steel mill Wuhan Iron and Steel Group announced on Wednesday a price increase on key steel products by 500 yuan ($73) per ton for May on the back of rising raw materials costs.

China's other major steel mills including Baosteel and Anshan Iron and Steel Group are also set to raise steel prices to transfer costs after iron-ore prices nearly doubled last year amid a shift to a quarterly pricing system.

Wuhan Steel raised its hot- rolled steel price to a record high this year of 4,700 yuan per ton.

Prices for hot-rolled steel coil, tinplate, electrical steel, pre-painted steel and wire rod will surge by 500 yuan per ton, while prices for cold-rolled plates will go up by 100 yuan.

"Steel producers had no choice but to transfer the higher production costs to consumers to defend a decline in margins," said Xu Xiangchun, an analyst with industry watcher Mysteel.com.

The new pricing system started April 1, with reports BHP Billiton was already getting more than $130 a ton for its ore under April-June contracts, more than twice last year's fixed price.

The spot price is even higher, with 63 percent ore content Indian ore touching 1,280 yuan per ton including freight on Wednesday, according to data from Mysteel.com.

Surging iron ore prices pushed steel prices up across the board. The average price of screw-threaded steel in China's 24 largest cities hit 4,603 yuan per ton on Wednesday, 240 yuan higher than March.

"Steel prices will continue to rise in the short term, with increasing demand for steel products and raw materials including coke and iron ore," said Xu.

But flexibility for price growth might not be very great, since steel prices have already been standing at a fairly high point - already at 3,700 yuan per ton during the Spring Festival, he said.

Average steel prices in China are now at their highest point since August 2009, according to Mysteel's composite steel price index, rising by 15 percent over the last month.

China's crude steel output stood at 50.3 million tons in February, up 22.5 percent year-on-year, while the country's steel output this year is expected to rise 10 percent.

The nation's iron ore imports jumped to 59 million tons last month, up from 49.3 million tons in February, according to data from the Customs.