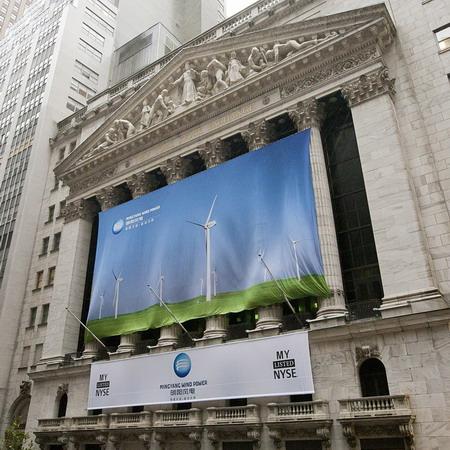 According to an NYSE source, the offering came after a number of Chinese companies priced their IPOs including China's SouFun Holdings Ltd (a Beijing- based real estate Internet portal) and Country Style Cooking Restaurant Chain Co (A Chinese quick service restaurant chain), both priced in September. And Ming Yang is the only non state-owned company in wind power business on NYSE.

The company raised $350 million IPO proceeds to develop wind turbines and is focusing on the R&D. Morgan Stanley, Credit Suisse and BofA Merrill Lynch are acting as joint bookrunners for the offering, according to the company's press release.

China has developed rapidly in wind power industry in the world in the past ten years, Zhang told China Daily, adding that the market is still growing which presents increasing opportunities for wind turbine makers like his company.

After the IPO, the company plans to tap into international market and top the list of turbine manufactures in the coming three years, said Zhang, adding that the company set up an office in Dallas in May to develop its US market.

Ming Yang started developing large-scale wind turbine generator sets in 2006. With only a few years, it is already a key enterprise of worldwide equipment manufacturing in the industry.

Sharing his vision, Zhang said they saw the trend and potential in this field in 2006 and thought they must seize the opportunity to start the turbine making business.

He added that that China has provided a good environment for wind power business in terms of resources and policy.

The Chinese government has recently strengthened its support to renewable energy by amending its Renewable Energy Law, which came into effect in January 2006, and requiring the energy companies to purchase all the electricity produced by the renewable energy sector.

According to the China Academy of Meteorological Sciences, China possesses a total 235 gW of practical onshore wind power potential that can be utilized at 10 meters above the ground.

In 2009, China overtook Germany as a country with the second largest installed wind power capacity, after the United States, according to the China Wind Energy Association.

"Compared to other European turbine makers, Ming Yang not only produces standard products but also makes customized ones and this gives us the advantage to compete with them," Zhang noted.