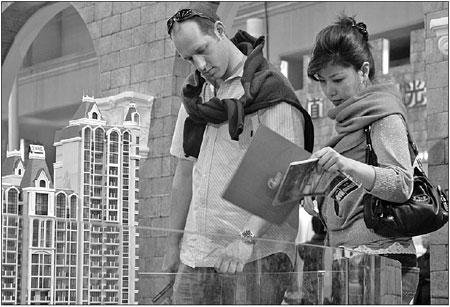 A couple from overseas chooses housing at a real estate fair in Beijing. An industry source says the Ministry of Housing and Urban-Rural Development will regularly assess overseas capital's entry to the property market with the Ministry of Commerce and the State Administration of Foreign Exchange. [China Daily]

China will enhance the regulation of foreign institutions' investment in the country's property market and home purchases by non-Chinese citizens, as part of its efforts to curb the inflow of hot money and continue tightening of the real estate sector, a senior official said.

Minister of Housing and Urban-Rural Development Jiang Weixin said at a national conference that China will crack down on speculative home purchases and curb excessive growth in property prices next year.

The government will also strengthen the implementation of tightening measures unveiled in 2010.

The country has rolled out a string of tightening measures to cool the market, including suspending mortgages for third-home purchases, speeding up trials of property taxes, raising down-payment requirements for first-time home buyers and only allowing foreign citizens living in China to buy one home for their own use, which have "helped contain speculative demand to some extent", Jiang said.

An industry source said the housing ministry will regularly assess foreign capital's entry into the property market with the Ministry of Commerce and the State Administration of Foreign Exchange.

Foreign investment in China's property sector rose 48 percent to $20.1 billion in the first 11 months, the Ministry of Commerce said on Dec 15. This is almost three times the 17.7 percent increase in the country's total overseas capital inflows.

To curb the trend, the Ministry of Commerce ordered local authorities to halt the approval of some foreign property investments to stop speculative purchases, it said in a Nov 22 statement. Meanwhile, local authorities are also required to strengthen their reviews of foreign exchange inflows for real estate transactions and documentation for land rights.

John Wong, director of investment services at Colliers International, said it is still hard to determine the impact on foreign institutional investors as these rules are guidelines without detailed regulations.

"It also depends on the implementation. In fact, some local governments in second- and third-tier cities welcome foreign institutions as part of their efforts to boost foreign investment," Wong said.

Colliers' statistics show that among the public deals in Beijing's property investment market this year, foreign capital accounted for around 40 percent, compared with last year's 20 percent.

According to a managing director at a joint venture real estate fund, these rules will help to curb the entry of speculative investors seeking short term returns.

"But for foreign investors having a five to 10-year plan at China, their business is not likely to be affected unless the government directly prohibited foreign investment's entry into the property sector," he said, asking not to be named. "To some extent, strengthening regulations is a good thing for the market."

China's climbing interest rates and a stronger yuan are making the country a more attractive destination for foreign capital. Most economists estimated a 75 basis points interest rate hike and a 5 percent appreciation in the renminbi in 2011.

"The scale of hot money flooding into China will definitely increase next year, due to the interest rate gap between developed and developing economies and expectations of renminbi appreciation," said Zhang Ming, a senior research fellow at the Chinese Academy of Social Sciences.

"The stock and property markets are still the two major fields for the inflow of speculative money. China thus faces more pressure in containing asset price growth next year," he added.