Consumers in China are aggressively adopting LCD TVs that use LED backlighting, causing domestic shipments in 2010 to surge by a factor of nearly 14, according to iSuppli.

With sales being driven by a government stimulus plan designed to promote LCD TVs, demand in China is so robust that availability of LED-backlit sets has become constrained, causing some consumers to delay their purchases until they can get the product they want, said Riddhi Patel, director for TVs and retail services at iSuppli.

Nonetheless, China's LED-backlit LCD TV sales continue to pick up steam as the year progresses. Shipments amounted to 953,000 units in the second quarter of 2010 and are forecast to climb to 1.6 million units in the third quarter. This will mean that LED-backlit sets will reach a market share of more than 18% of the entire LCD TV market.

Market share is expected to deepen to 23% in the fourth quarter, or even to more than 30% for premium brands such as Hisense, Skyworth and Samsung.

Revenue growth likewise will be staggering, jumping to US$24.8 billion by 2014, up from a mere US$777 million in 2009. With revenue CAGR of 100% for the forecast period, it is no mystery why local and foreign OEMs are ramping up support for LED-backlit TVs.

Just the same, given the short supply of LED-backlit TVs in China, and with prices taking longer than expected to fall, consumers have become more cautious in their buying decisions, with some going as far as postponing an LCD TV purchase until an LED-backlit set becomes available. Consumers, who previously bought whatever TV set could be found on the market regardless of technology trend or features, now have developed decidedly more discriminating tastes in their TV purchases.

Other advanced TV features off to a slow start

While LED backlighting technology is in high demand in China, other new features, such as Internet capability and 3D display, have met with less enthusiasm.

For its part, the China government's own policies are serving to inhibit the growth of Internet-Enabled TVs IETVs A government crackdown on what content consumers can view is a bitter pill to swallow for some consumers, who cannot justify paying for an extra feature that cannot be used to full potential.

Still, the volume shipments of LCD IETVs in China will continue to rise as local OEMs strive to make Internet connectivity in TVs a standard feature in their high-end products. Without abundant and attractive content support, IETV as a feature will not be one that fuels the China market.

In the case of 3D LCD TVs, such sets are still far from common, with consumers showing little interest. As a result, 3D will do little to help boost overall LCD TV shipments in 2010, even though the feature has good potential and will become more popular when prices decrease and content becomes available. 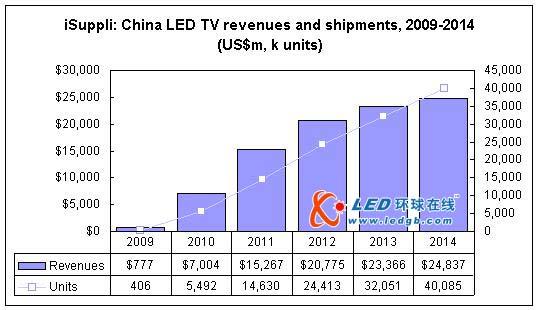 Overall, the slow retreat of LCD TV prices in China during the second quarter made feature-rich plasma TVs more attractive than similarly sized LCD TVs in the country, accounting for a rise in the shipments of plasma panel displays during the period.

Plasma's advantage will not last long, however: The continuing decline of LCD TV prices in the third quarter is expected to squeeze shipments of plasma units, which once again will feel the pressure from their more popular rival technology.