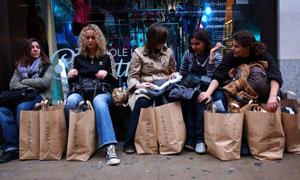 The BBC programme Panorama on Monday featured an investigation on retail giant Primark, highlighting the clothing chains suppliers who used child labour to produce its products. Activists have urged the UK government to take action on child labour after Primark fired three of its Indian suppliers who sub-contracted smaller firms allowing children to carry out embroidery and sequin work. John Hillary of the charity War on Want said the government "should be looking down the supply chain". He told the BBC: "We have health and safety regulations in all of the workplaces in this country so it's a fairly understood idea. What we're saying is that the British government should be looking down the supply chain, all the way to the factories in China, in Bangladesh, in India, and they should be calling on our retailers to ensure that those workers have proper terms and conditions."

Consumers are increasingly demanding that companies produce goods in an ethical manner, turning the spotlight on worker wages and working conditions.

Child labour activist Bhuwan Ribhu said it harmed children "practically every which way"."Socially, morally, psychologically, physically," he said, "we are essentially ruining all our future generation."

Primark in a statement said:"The information provided by the BBC enabled us to identify that illegal sub-contracting had been taking place and to take action accordingly," Primark explained. According to Primark, the garments affected accounted for 0.04% of the retailers' worldwide sourcing.

Primark says it will terminate relations with suppliers guilty of certain "transgressions" and those unwilling to make the "necessary changes" to their employment practices when breaches of its code are uncovered.

Primark has proved one of the UK High Street's unquestioned success stories in recent years, its mixture of low prices and accessible fashion proving a hit with varying age groups. It currently has more than 170 stores and made a £200m profit last year on total sales of more than £1.6bn.

Leading European and US retailers have come under growing pressure to ensure that workers in their supply chain - particularly in labour-intensive markets such as India and China - are not exploited.