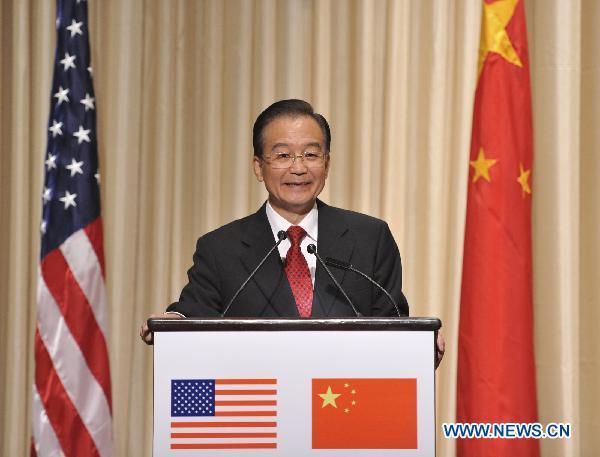 Visiting Chinese Premier Wen Jiabao said here Wednesday there was no basis for the drastic appreciation of the yuan, the Chinese currency.

During a speech at a welcome banquet by U.S.-China friendship organizations, Wen said the issue of the yuan exchange rate was an economic one and must not be politicized.

Some have linked the yuan exchange rate with China's favorable balance of international trade, saying China keeps the level of the Chinese yuan low to win competitive advantages.

However, Wen said, there was no certain connection between the exchange rate and a favorable balance of trade.

For example, the United States had maintained a trade surplus for more than 90 years, from the 1870s to the 1970s. But this had become a trade deficit since then and the imbalance had grown bigger in the following years, which was obviously not caused by exchange rate fluctuations, Wen said.

China had maintained a favorable balance against the United States and the European Union, but had a trade deficit with Japan and South Korea, which indicated the trade imbalance between the two countries could not be explained by the level of the yuan exchange rate, Wen said.

He said China had always been highly responsible on the issue of the yuan exchange rate and the issue should be considered with a historical view.

According to statistics based on the exchange rate index of the Bank for International Settlements, the yuan had appreciated by a massive 55.2 percent since January 1994 as of July this year.

Meanwhile, major currencies of the world had depreciated, with the U.S. dollar dropping 2.5 percent, the euro 3.8 percent and the Japanese yen 19.5 percent.

During the same period, the yuan had remained basically stable, which contributed greatly to stabilizing the international financial situation and promoting a world economic recovery, Wen said.

The yuan had seen increased flexibility since June 19, when China launched further reforms of the yuan exchange rate mechanism, he said.

Wen said China had made active efforts while still facing great difficulties and there was no basis for drastic appreciation.

Reforms on the exchange rate, which was in accordance with China's long-term and fundamental interests, would be continued, he said.

At the same time, China would also launch structural reforms in an active and effective way to expand domestic demand, particularly civilian consumption, and to promote a sustainable balance of payments, Wen said.