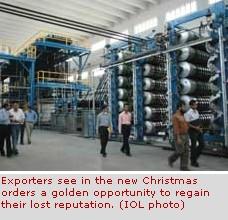 "The industry was going down until we received Christmas orders this year. We have received 20 per cent more orders this year," Mohsin Mirza, Chairman of Pakistan Readymade Garments Association, told IslamOnline.net.

"This is a kind of revival of the textile industry in Pakistan."

Mirza says the Christmas orders have prompted the otherwise tottering industry to pick up.

"The industry was really in a bad shape, especially during last year, when we receive fewer orders due to recession and other factors."

A massive backlog last year, caused by gas and power shortage, not only incurred huge losses on exporters but earned them a reputation of being unreliable.

The energy crisis also forced the entrepreneurs to lay off thousands of employees associated with textile industry.

Textile is the largest employment sector in Pakistan.

Around 2.5 million people are attached with this sector, which has suffered a lot during last few years due to a simmering energy crisis and an ongoing spate of violence. 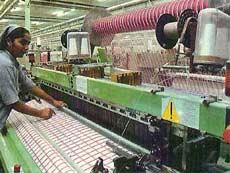 Textile is the largest employment sector in Pakistan with around 2.5 million people attached with this sector. (IOL photo) Exporters see in the new Christmas orders a golden opportunity to regain their lost reputation.

"The outside world had started considering us unreliable exporters as we could not meet their requirements as per agreement due to massive energy crisis," Ijaz Khokar, a leading Pakistani exporter, told IOL.

The failure of Pakistani exporters in fulfilling their commitments forced many customers to turn to China.

"But thanks to China, which has gone expensive and over-burdened, the customers are coming to us."

Khokar gives credit to the entrepreneurs for this.

"We wandered country to country to get Christmas orders because the foreign buyers have stopped visiting Pakistan. The government’s performance is zero in this regard."

According to textile industry sources, almost 95 percent local exporters have completed and delivered Christmas orders despite the ongoing energy crisis.

"We could not afford losing our customers once again despite the fact we had a huge backlog this year too due to the same reasons," Khokar said.

"But this time, we airlifted the shipments to deliver them on time, which cost us 45 percent of the actual profits," he added.

"But we don’t care about that. We wanted to regain the lost reliability, and get new markets, which by the grace of Allah we have done," added Khokar.

"We have earned little profits this year, but we are sure that Inshaullah next year we will earn a lot.

"This year was aimed at regaining our lost reliability."