Gucci items to be featured in Christie's Fashion Through The Ages

Gucci items to be featured in Christie's Fashion Through The Ages 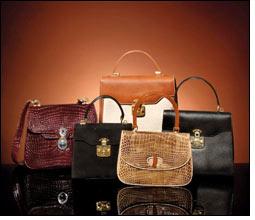 Following the January 2010 launch of Gucci Collector: Presented by Christie s, the first nine months of the collector s service have unearthed more than 600 submissions from over 25 countries. The first Gucci-certified online destination for appraising vintage Gucci products receives regular uploads from Gucci collectors all over the world, which are then appraised by a team of experts from Christie s and from Gucci s own Archive Department. Over 30 of the most precious and unique items, including handbags and jewellery, will be featured in Christie s upcoming annual Fashion Through The Ages sale on December 2, 2010.
For nearly 90 years, the House of Gucci has continuously produced spectacular products that have been treasured and passed down through family generations or avidly hunted down by vintage connoisseurs. The impeccable quality and craftsmanship of Gucci s products has ensured their value as investment pieces, while the innovative designs have rendered these items timeless. Gucci Collector: Presented by Christie s has been designed specifically for those impassioned collectors who want to learn more about their vintage treasures, both in provenance and worth, and has become the ultimate resource for vintage and interested novices alike.
Gucci items ranging in value from 600 to 3,000 will be featured in Christie s Fashion Through The Ages sale, originally submitted through the free service offered on a dedicated section of the Christie s website accessible both via gucci.com and christies.com.
The customized section, which allows owners to upload photos of their vintage items and to submit an appraisal request, is the first single fashion house specialization to be featured on the auctioneer s site. Within a 2 to 4 week period, Gucci Collectors receive an auction estimate, prepared by Christie s Director of Fashion and Textiles, Patricia Frost and her team of costume specialists in collaboration with the Gucci Archive Department.
Collectors are also informed as to whether the product would be appropriate either for a potential Christie s vintage sale, or if it might be of interest to either Gucci or Christie s from an historical perspective. Participation in sales is purely optional for owners seeking appraisal, while prospective buyers can be assured that the products have received an official appraisal from one of the world s most respected auction houses.
In anticipation of the December 2 auction, Gucci s Archivist has selected her top picks of the most unusual and desirable items for a special preview currently available on Gucci.com. In addition, Christie s Director of Fashion and Textiles Pat Frost has also compiled her favorite items submitted through the appraisal service and selected for sale, available for viewing on Christies.com.
Since the launch, the vast majority of submissions have been treasured possessions that were inherited or passed down through family generations. Many items were once their owner s favorites, for example a rare beauty case from the late Seventies/early Eighties which traveled the world and yet remains in excellent condition, reflecting the House s unparalleled craftsmanship.

Another testament to the endurance and quality of Gucci is the outstanding look and feel of a rediscovered white leather handbag with bamboo detailing from the late Fifties. Upon appraisal for their items, the select collectors invited to participate in the auction were delighted to learn that their Gucci items have a chance of returning to their home as the House may reacquire them for its own archives.
The Gucci Collector initiative coincides with the House s plans to open a Gucci museum in Florence, the birthplace of the Italian House, to coincide with Gucci s 90th anniversary in 2011. The museum will include rare pieces which Gucci has been able to reacquire for its archives through the collector s service.