Sales of drink from Taiwan on additive health scare

Sales of drink from Taiwan on additive health scare 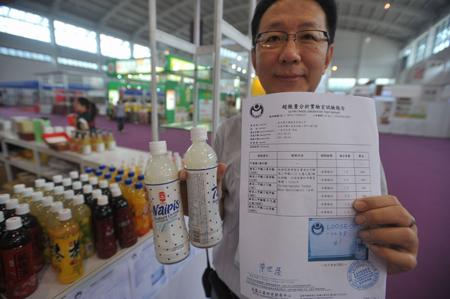 A Taiwan businessman displays a quality report to visitors at a "Made-in-Taiwan" exhibition in Shenyang, Liaoning province. [Photo / China Daily]

BEIJING - China has banned shops and restaurants from selling drinks from Taiwan that contain an additive that has potentially harmful effects.

Sports drinks, juices, tea drinks, fruit jams or syrups and tablets or powders are among the items proscribed because they contain di (2-ethylhexyl) phthalate, otherwise known as DEHP. The organic chemical is normally used to make plastics less brittle but has been added as a cheap replacement for the palm oil that improves the look and taste of the beverages.

Children are said to be especially prone to the effects of high doses of the compound, which can lead to testicular or kidney damage and fertility problems. However, according to the DEHP Information Center, the European Union has confirmed that DEHP "poses no general risk to human health".

Sales of the affected drinks in Taiwan fell 60 percent after the news broke, Taiwan's Eastern Television (ETTV) reported. The scare is set to cost Taiwan's food sector at least NT$10 billion ($348 million), said the chief of economic affairs Shih Yen-shiang, according to the Taipei Times.

As of June 10, the Chinese mainland had banned imports of 950 products from 280 Taiwan companies, according the General Administration of Quality Supervision, Inspection and Quarantine. Most of the banned products are beverages and sandwich spreads.

Ye Zhenyu used to be a big fan of Taiwan-imported beverages. "They are usually adorably packaged and colorfully presented, and so could quickly win a girl's heart. Plus they taste so good," said the 25-year-old Xiamen resident.

"I used to grab one every morning, even if they are a little expensive." Each bottle costs 7 yuan ($1.08) compared with an average of 4 yuan for local brands.

Ye stopped buying drink from Taiwan after returning from a recent visit to the island.

"I was shocked by the fear in the air," she said. "Everyone feels insecure about drinks like they are some kind of devil. Even grandmas were telling me not to buy sports drinks."

Now even if Ye wants to buy the drinks, she will find her favorite selections, such as guava and asparagus juice, are no longer available at local convenience stores. Billboards advertising "Taiwan flavor", which was once a selling point, have also been removed from store fronts.

"There's less of a panic here than in Taiwan but I can feel the tension mounting," Ye said.

In the duty-free market in Dadeng Island, Fujian province, famous for its wide selection of food and daily necessities from Taiwan, buying a drink now draws strange looks and sarcastic admiration for "being brave".

According to the administrators of the market, tourists and sales have dropped 40 percent since the additive scandal broke out.

In Shanghai, 7-Eleven stores have quietly replaced most of their Taiwan-produced food and beverages with local brands. The chain store in Shanghai was run by the Taiwan-based President Corporation and once used Taiwan brands as its showcase products to differentiate it from the competition.

China's largest online shopping website, Taobao.com, has also asked its sellers to remove all the blacklisted products. In Yiwu, Zhejiang province, a noted wholesale market for small commodities, sales of Taiwan-made drinks have declined 80 percent. Similar statistics are reported in some other cities, including Beijing and Dalian, Liaoning province.

Despite the fact that Taiwan-imported products only account for a small percentage of Taiwan brands, most of which are produced locally, the overall image of Taiwan food products has been damaged on the mainland.

In an online survey by SearchChina.com, more than 40 percent said they would not purchase food products from Taiwan any more.

"Although the blacklist of tainted products has already been released, we customers simply could not afford to check the list all the time, with new names being added every day," read one comment following the survey. "Just to be on the safe side, I chose to boycott all Taiwan food products."

A Ms Huang, a Taiwan resident who is working in Shanghai, added: "I don't pick up Taiwan-produced drinks not only because of the potential risk of contamination, but also because they cost more here than in Taiwan."

The owner of a convenience store in Beijing said: "Sales of Taiwan juices have decreased terribly. More people are buying spring water and soft drinks instead."

Chen Jing, a beverages analyst with Beijing Orient Agribusiness Consultant Ltd, said: "The effect on mainland customers is mostly psychological." He added that other drinks companies could take advantage of the situation.

Pepsi Co did not comment on the potential opportunities, but said additives such as DEHP are strictly forbidden in its beverage products, and the company always places food safety at the top of its priorities list.

The mainland's largest juice producer, Huiyuan Juice Group Ltd, announced a new sales campaign with a 30 percent price cut to gain a larger market share, but the company refused to make public the ingredients in its own additives.

"I'd still choose Taiwan drinks - not juice, but tea instead - regardless of all the warnings," Ye said. "I think I'm already invincible after all these food-security issues we've survived over the years."