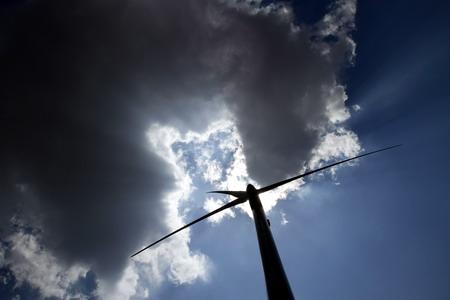 MADRID - About 350 kilometers from Madrid, the capital of Spain, Europe's second-largest wind power country, the world's largest onshore wind turbine has been in operation for two years.

The 120-meter-high turbine represents the world's most advanced wind turbine technology called INNOBLADE, which uses sectional blades to reduce blade weight, resolving one of the most troublesome problems of wind turbines.

The latest model, capable of generating 95 megawatts (mW) of power daily, is the next machine that Gamesa Corporacion Tecnologica SA will bring to China, the world's fastest-growing wind power market.

The Chinese government is asking for larger wind turbines, as locations with superior wind resource have already been taken, leaving the areas where wind power generation requires larger and stronger wind turbines.

"We expect the G128, 4.5 mW turbine to be installed in China in the next few months," said Jorge Calvet, chairman and president of Gamesa.

China will become Gamesa's largest market in terms of revenue by the end of 2011 when all of its orders will come from overseas markets and Gamesa expects China to make up almost one-third of its market, up from the current 28 percent.

"Though intellectual property rights have been a concern for foreign manufacturers to bring the latest technology here, they will not hesitate as long as there is market demand," said Celia Sun of MAKE Consulting, a specialist in the wind energy industry.

Previously there has not been a strong driver for international wind turbine manufacturers to produce multi-megawatt turbines in China because of higher costs and the underdeveloped domestic supply chain for large wind turbine components.

However, in order to bid for domestic contracts, manufacturers must have an installation track record of 2.5 mW or larger turbines. This could be a key driver in the future for international manufacturers to install multi-megawatt turbines in China, Sun said.

As a result, industry experts forecast that 80 percent of the manufacturers are likely to be out of the market in two to three years.

Foreign wind turbine makers are striving to expand in the Chinese market through different strategies. Some have established local branches in China in order to better compete with Chinese manufacturers. Others collaborate with independent power producers on project development or establish joint ventures with State-owned enterprises, according to the Denmark-based MAKE Consulting.

Gamesa has formed its strategy in the Chinese market through cooperation with State-owned wind farm developers.

In return, Gamesa, the only wind turbine manufacturer that engages in worldwide windmill operation, agreed to provide Chinese clients access to its global wind farm portfolio.

"It will be difficult to be successful in China by only selling turbines," Calvet said.

Shi Pengfei, vice-president of the China Wind Energy Association, said, "foreign companies are looking for new approaches to expand their businesses in China. Setting up joint ventures is a new way. Siemens AG and Shanghai Electric Group Co Ltd, and General Electric Co and Harbin Electric Inc are good examples in this regard."

Meanwhile, Gamesa is going to reduce the number of its plants in Europe to less than 20, where it sees a shrinking market, and add more production capability in China.

Gamesa has three new plants in the pipeline as part of its strategy to utilize China as its export hub to Southeast Asia.

According to Gamesa's Calvet, China, the world's largest wind power country by installed capacity, has the most stable regulatory framework in wind energy.

The United States, the other widely deemed promising wind market, is expected to see a drop to 15 percent from the current 28 percent of Gamesa's business, partly because of the wind energy tax credit cut.