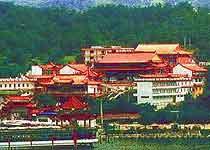 Take the No. of travel special line 2 of suburbs, the direct river scenic spot of Taoist temple of new continent of the car at the harbour long-distance bus station of the passenger traffic of Wuhan, start for time as 9 of morning every day: 00,The single fare is 18 yuan for each person.