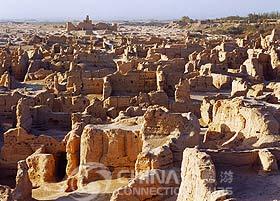 The Ancient City of Jiaohe is one of the world's architectural wonders hiding in the Yarnaz Valley, 10 kilometers west of Turpan City. Shaped like a willow leaf, the ancient city of Jiaohe has a history of 2,300 years and lies between two rivers on a loess plateau atop a cliff of over 30 meters. Jiaohe is 1,760 meters long from northwest to southeast and is 300 meters at its widest, with an area of 430,000 square meters. In the Western Han Dynasty (206BC - AD24), the city served as the capital of the Ancient State of Cheshi, one of the 36 kingdoms in the Western Regions. During the Tang Dynasty (618-907), the government established Jiaohe County under the jurisdiction of the Tang Western Prefecture. "Anxi Frontier Command," the highest military and administrative organ established by the Tang Dynasty in the Western Regions, was once set here.

The castle was a strong defensive bulwark. As an Indian proverb says, "Intelligence is bound to exist where two rivers 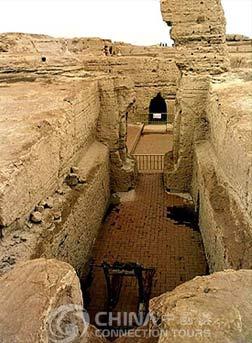 meet." Jiaohe, meaning in Chinese where two rivers meet, is such a place. People outside the wall of the castle could not learn information inside the castle, but people inside the castle had a command position over people outside the castle. Jiaohe was the capital of the Ancient State of Cheshi, built about 2,000 to 2,300 years ago. According to historical records, it then had an area of 250,000 square meters and was home to 700 households, 6,500 residents plus 865 soldiers. Jiaohe distinguished itself from other ancient cities owing to three features. First, it had only two city gates, the South and East Gates. The main south gate vanished long ago, leaving a huge breach. The east gate cut by the cliff was virtually non-existent. Second, the city faces cliffs on three sides, so there are no city walls commonly seen in other ancient cities. Third, all the buildings were dug from earth, and wood was rarely used. Inside the city were residences for common people, residences for aristocrats, temples, and workshops.

At the end of the Eighth century, the city was tossed into the reigns of the Turpan, Hui, and Mongols. Residents fled from the destroyed city until the beginning of the 14th century when the site was abandoned, along with its glory and prosperity of over 2000 years. Miraculously, owing to the arid climate and remote location, the ancient city of Jiaohe remains intact, leaving the world with a rare exemplar of an earthen castle.

The relics seen there today feature Tang Dynasty architectural styles. Houses were dug downward from the earth, and as no house gates faced the streets, military defense was apparently the priority. Many cultural relics were unearthed, such as antefix of the Tang Dynasty and Buddhist scriptures. The Ancient City of Jiaohe is the largest, oldest and best-preserved earthen cities in the world.

It was listed in 1961 as one of the key national cultural relics under State Council protection.