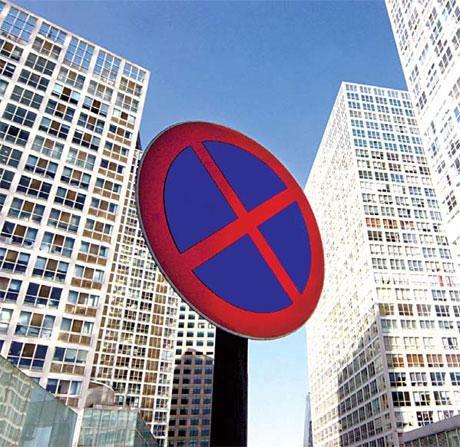 Existing housing prices are already out of the reach for most people in key cities, so who are the major buyers? Netizens believe the country's property sector is heading to a dead end. Provided to China Daily

How much should two chicken pancakes cost? For Zhao Rui, a 28-year-old company executive in Beijing, they cost him 400,000 yuan when he missed the chance to buy a home at a lower price during his lunchtime.

In early March, Zhao settled on a two-bedroom apartment in Beijing's Tongzhou district outside the city's eastern Fifth Ring Road. Except for the 18,000 yuan per square meter price, he was quite satisfied with it. So, before finally handing over the cash, Zhao and his girlfriend decided to have lunch. But when they returned to the sales office and were ready to pay, they were told that the apartments had sold out and they would have to wait another three weeks for the next building to become available.

A couple of weeks later, Zhao, fearing he could never afford such a home if he continued to hesitate, paid 400,000 yuan more for a similar sized apartment in the same community.

Zhao's experience is the epitome of China's property market after the annual sessions of the nation's top legislature and the political advisory body in March.

Because there were no further tightening policies from the legislative session, due to supply and demand imbalances and the frequent appearance of "land kings", peoples' expectations of further price hikes strengthened and the market returned to a fast growth track, fueling concerns of a bubble.

According to the National Bureau of Statistics, property prices in China's 70 major cities grew 11.7 percent in March from a year earlier, up from 10.7 percent in February, the biggest year-on-year increase for a single month after the bureau expanded its coverage ambit to 70 cities in July, 2005.

At the recently concluded Beijing Real Estate Expo, the average sales price of new apartments in the capital was 21,164 yuan per sq m, double that of last year. Statistics from China Real Estate Information Corporation show that 793,000 sq m of residential housing was sold in Shanghai in March, surging 140 percent from the previous month. This was the first rebound after three consecutive months of declines.

Surprisingly, despite most people complaining about soaring property prices, most real estate projects in the country's key cities still sold pretty well. In fact, quite a number of projects in Beijing and Shanghai were sold out on their first day of trading. In Hangzhou, more than 4,000 people struggled for 224 apartments with an average price of 18,000 yuan per sq m last weekend, creating chaos and forcing the developer to call the police.

As the current prices are already out of the reach of most people in key cities, who are the major buyers?

According to a report from the central bank, investment-oriented home purchases accounted for 23.1 percent in the first quarter of this year, reaching a record high in the past two years. The proportion, which has been on the rise for four quarters in a row, is 1.8 percentage points higher than the previous quarter.

The report also shows 14.2 percent of residents have more than one apartment, one percentage point higher quarter-on-quarter.

"With a spare 400,000 to 500,000 yuan at hand, could you find a better investment channel than buying properties?" said Li Yan, a businessman working in Wenzhou and Beijing. But, even though properties are regarded as the best commodity to hedge inflation risks, the skyrocketing property price has made such an investment more risky, as evidenced by internationally accepted indicators.