The Global Property Guide's latest survey of house prices shows an uneven recovery in global housing markets during the year to the end of the 1st half of 2010.

On the other hand, Europe is very mixed, with Latvia (up 9.4%) and Finland (up 9%) surging (though Latvia's price rises have since stalled), while house price declines continue in Ireland, Bulgaria, Lithuania, Iceland, Russia, Croatia, Spain and Slovakia.

Ireland had the steepest price falls of all the countries covered.

Only 6 countries saw bigger price decreases, or smaller increases, during the year from Q2 2009 to Q2 2010, than during the same period the previous year.

Nominal figures, which are more usually used, are shown in the second table. 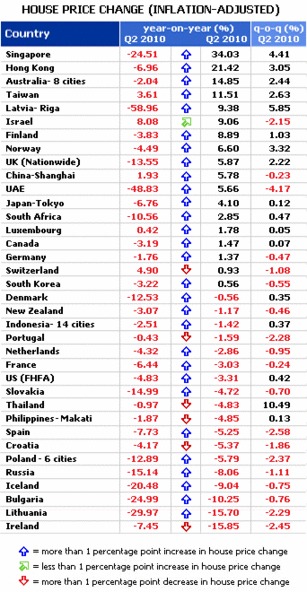