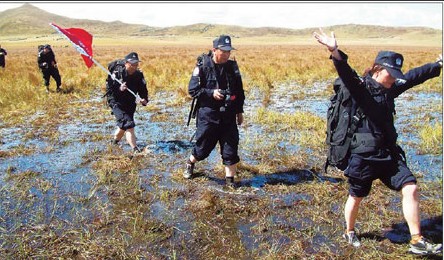 Dressed in Red Army uniforms, hundreds of people in Xiaojin county, Sichuan province, hike along a part of the Long March route to commemorate the historical event. Provided to China Daily

When the Red Army trekked through some of China's most remote and treacherous areas during their Long March, they could never have imagined the same route would become part of the travel itinerary for travelers 70 years later. Today, many places along the Long March have become tourist destinations as China tries to boost "red tourism". The National Tourism Administration recently selected the "Long March Route" as one of 12 national tourism routes.

On the website of China Travel Service, "red tours" rank at the top of themed tours, above "folklore tours" and "international horticultural exposition tours".

The itineraries offered by the company cover many areas of the Long March - from Jiangxi province, its starting point, through Guizhou, Yunnan and Sichuan, to Shaanxi, where the Red Army ended its journey.

China CYTS Tours recently launched its "Year of Red Tourism" with the theme, "Retracing the Long March". Its first group of tourists went to Guizhou's Long March sites such as Loushanguan, Chishui and Maotai."With an increase in living standards, people are looking for a more spiritual travel experience," says Ge Qun, vice-president of China CYTS Tours. "The reason 'red tourism' has become more popular is that Chinese people want to know more about history."

One of the epic adventures of the 20th century, the Long March began in October 1934, when the First Red Army set out from Yudu in Jiangxi province. They would eventually traverse some 12,500 km over 370 days and arrive in Wuqi, Shaanxi province on Oct 19, 1935.

Places where important events during the Long March happened are now hot destinations on "red tours", such as the former site of the Zunyi Conference which consolidated Mao Zedong's leadership of the Red Army, and Luding Bridge where the Red Army crossed the Dadu River in 1935.

Pursued by the numerically superior Kuomintang army, the Long Marchers often had to cross difficult terrains, snowy mountains and swamps. Fatigue, hunger and sickness claimed many lives, and only one-tenth of the force that left Jiangxi completed the Long March.

Equipped with better infrastructure, many of these areas are more accessible today, and their natural beauty is attracting some travelers.

For example, Zhangjiajie, in Hunan province, was the starting point of the Second Red Army's Long March. With its breathtaking rock formations, the area is one of the most popular tourist sites in China and was the setting for many scenes in the blockbuster Avatar.

Jiajin Mountain in Sichuan province, the first snow mountain on the route of the Long March and the place where the First Red Army joined forces with the Fourth Red Army, is now a national forest park known for its rich botanical and zoological resources.

During the Long March, the Red Army traversed the areas of many ethnic groups, including Miao, Dong, Qiang, Tibetan, Hui and Mongolian. Their diverse cultures are also one of the attractions of tour itineraries related to the Long March.

According to Zhang Guangrui, director of the Tourism Research Center of the Chinese Academy of Social Sciences, most of the areas of the Long March have not been developed because of their relative isolation.

"However, their underdeveloped state and remote locations have also helped protect the natural environments and traditional cultures, which are the very things that most travelers look for," he says.

The historically and naturally rich route of the Long March attracts not only Chinese tourists, but also those from overseas.

"Following the Red Army's Long March was a once-in-a-lifetime adventure. Hiking through the breathtaking snowy mountains and the demanding grasslands, all the while retracing the steps of history, was unforgettable," American traveler Andy Smith commented after completing a 15-day-trek along a part of the Long March, from Jiajinshan in Sichuan to Lazikou in Gansu.

Smith was in a group organized by Red Rock Treks, a company set up by Englishman Ed Jocelyn, who retraced the entire marches of the First and Second Red Army on foot, in 2002-03 and 2005-06, and who co-authored the book The Long March, which was published in five languages in 2006-07.

Detailing the itinerary he designs for foreign travelers interested in the Long March, Jocelyn says: "From a Tibetan village in the valley of the Blackwater River, we will first cross two of the great snow mountains of western Sichuan province. At 4,450 meters, the pass over the second of these is the highest point of Mao's entire march.

"We then enter the infamous grasslands, a vast region of prairies, swamps and bogs more than 3,400 meters above sea level on the Qinghai-Tibet Plateau, where hundreds of Mao's soldiers perished in 1935.

"Finally, we explore the ancient and long-disused trail into Northwest China via the stunning valleys of Lawa and Baozuo. Accompanied by a Tibetan horse team, we will trek and live alongside yak herders whose way of life has changed little for hundreds of years.

"This is a true exploration not just of history, but also of a country and culture rarely seen by outsiders."

Although he organizes tour groups to retrace the Long March, Jocelyn recommends that fit people do it independently, like he did. He also suggests the tourism authorities make it easier for independent travelers by providing more information and publishing better guidebooks and maps, which are often hard to find.

Through his own two long marches, Jocelyn not only became more familiar with the geography of the Long March, but also came to understand China better.

In his own words, "to retrace the Long March is to take a journey through both the past and the present"