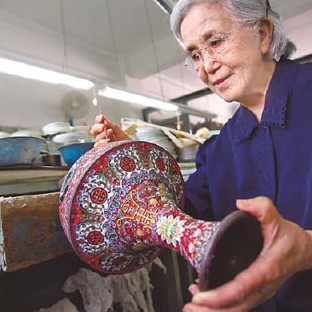 Few people would argue that the craft that most represents China's Ming Dynasty (1368-1644) is cloisonne enamelware.

The mainly blue metal artwork that requires more than 100 steps to finish used to be recognized as something reserved for the royal family and the nobility, not only because of the complicated process needed to make it, but also because of its price, which took into account the cost of pure gold and lots of copper, things ordinary folk could hardly dream of in that era.

Completing a piece of cloisonne is time-consuming. Craftsmen say it takes about three months to finish a vase only 15 centimeters high; pieces as large as 1 meter take much longer.

"There are roughly six major steps," said Zhang Li, a staff member of the Beijing Enamel Factory, the only time-honored brand in this industry. "The most important one is the second, pinching copper wire, which is the first thing we do in our factory."

The first step is making the base, which includes welding copper boards into the desired shape. This is done outside the factory.

The next process is called filling enamel, which produces the color of cloisonne after it is finished.

Craftsmen dip into the color needed for certain places using burettes and carefully put the liquid in position. At least three or four layers of coloring are required.

The item should also be burned between each layering of color to get rid of the frosted-looking surface, leaving it bright and shiny.Some people may think cloisonne only comes in blue because that's how it is named in Chinese - JingTai Blue.

Jingtai was the name of an emperor in the Ming Dynasty, and blue refers to the main color in use, but not the only one.

Over the centuries, colors used for cloisonne were only generated from natural crystal, which is ground into powder and mixed with water.

But as all colors other than blue need added gold to be visible, craftsmen had little choice but to make items mostly in blue.

After burning the colored works, they all look much like the finished product, apart from their rough surface and red lines, as copper turns red after burning.

So the next two steps are polishing and gilding.

Charcoal made of basswood is used in the polishing process to burn the surface of the cloisonne again. Then 24-karate gold is gilded over all the copper lines.

"The cost of copper, gold and irreplaceable manual skills together set the threshold of cloisonne's price," said Zhang.

Over 600 years, the 108 steps in making cloisonne were passed down generations of craftsmen mouth to mouth without any written rules or guidelines until in 1958 Qian Meihua, the first and one of the six most prestigious cloisonne designers in China, decided to devote herself to this craft at the age of 31.

Qian passed away in March 2010 at the age of 83. From June 8 to July 8, the Beijing Enamel Factory, the place where she had worked for more than 50 years, will hold an exhibition dedicated to her designs.

All the works are by Qian, including a 2-meter-tall vessel named "Peace", with all kinds of flowers and birds on it. This was her last work and also features the art of carving.

"The exhibition marks one of the factory's developing areas: high-end works of value for collectors," said Yi Fucheng, board chairman of the factory, who was a polisher back in the 1970s when he first came to the factory.

Yi said the other prospect for traditional state-owned factories like theirs is to combine the craft with modern architecture or interior design, like their efforts at making large outdoor fountains, or small containers for tea and Chinese white spirit.

"Applying the intangible heritages to daily life is better for their protection than simply making something beautiful but useless," Yi told METRO.