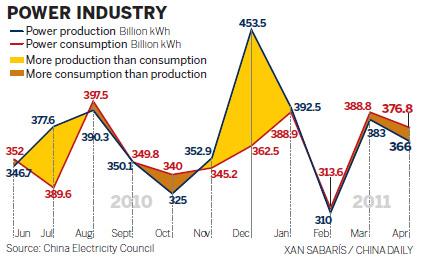 China's National Development and Reform Commission (NDRC), the country's top economic planner, announced Monday that it will raise the electricity prices for non-residential users by about 3 percent in 15 regions, in an effort to curb demand and boost power generation.

Starting from June 1, industrial, commercial and agricultural users will pay 16.7 yuan (US$2.57) more for every 1,000 kilowatt-hours of electricity, said the NDRC.

The power price hike came amid a severe electricity shortage around the country that might be the worst on record. Analysts believe the increase can help ease the current power shortage in the short-term, but won't influence much on the consumer price index (CPI) as residential power prices were left untouched.

The NDRC has increased the on-grid power prices in a total of 21 provinces around the country since April. "The hike in both on-grid and retail power prices showed the NDRC's eagerness to ease the electricity shortage," said Lin Boqiang, director of the Center of China Energy Economics Research of Xiamen University.

More than 20 provincial regions have experienced power cuts this year due to electricity shortages. According to the State Grid Corp of China, the country's power shortfall could reach as much as 40 gigawatts this summer, worse than 2004 when China sweltered through its worst crunch in decades.

China's five major power groups lost as much as 1.71 billion yuan in their thermal power business in just the month of April. Higher on-grid prices will encourage them to spur utilization rates.