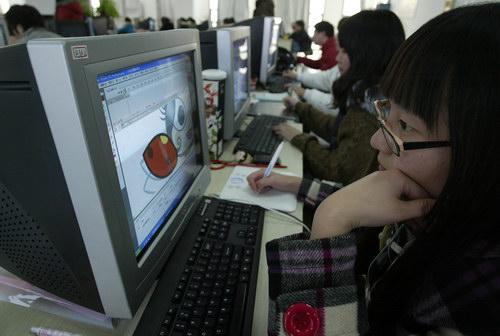 Staff at a Nanjing-based animation design and manufacturing company work on computers under an outsourcing deal with a Japanese company. [Photo/China Daily]

Outsourcing of backroom services expected to raise billions of yuan

SHANGHAI -The morning sun breaking through the dense mist casts a surreal glow on the rows of low-rise glass-and-steel buildings in this sprawling industrial park that is the pride of Hefei, capital city of Anhui, one of the less developed provinces of China.

Despite its name, the park, built in 2009, was never meant to be home to the many factories that have moved inland from the neighboring coastal provinces of Zhejiang or Jiangsu, where the costs of labor and land have escalated in recent years. The Hefei municipal government has other plans.

"We don't want to fall behind the development pattern of the coastal provinces," said Sheng Zhigang, vice-chairman of Hefei's Chinese People's Political Consultative Conference. Instead, "We want to leapfrog into the same higher-value-added services industry as they are focusing on."

Hefei Service Outsourcing Industrial Park is one of the four such developments in a project that covers a combined 6 million square meters at the outskirt of Hefei. The office buildings along the tree-lined roads in the park are home to the back offices of banks, industrial enterprises, IT companies and logistics firms.

Eight of the Chinese commercial banks, including Bank of China and the Agricultural Bank of China, have established their offices engaged in providing back-up services of data processing, customer service and research and development in the park. International logistics giant UPS has also invested 100 million yuan ($15.4 million) in the park for a 4,456-square-meter service center to process finance and human resources and act as call center for the Asia-Pacific region.

In 2010, a total of more than 200 service outsourcing providers realized an aggregated contract value of $817 million, accounting for about 2 percent of the city's gross domestic product (GDP).

Although this may sound insignificant to Hefei's economy as a whole, the city planners say they are confident their efforts in promoting the services industry will ensure more sustainable and greener growth than the traditional labor- and land-intensive industries.

Across China, in some other highly developed cities such as Nanjing, Hangzhou and Tianjin, the industry has already been proved effective and hailed as the "new green engine" of China's economy.

According to the 2010 Report on the Chinese Service Outsourcing Industry issued late in April at the third China Sourcing Summit held in Hangzhou, capital of East China's Zhejiang province, Chinese service outsourcing amounted to 270 billion yuan in 2010, up by 35 percent from the previous year, and it is likely to continue to increase with an annual growth rate of two-digits, as it has over the past five years.

According to central government plans, the service industry will account for 65 percent of the country's GDP by 2030, which is estimated to reach $1,770 billion, taking over from the United States as the biggest in the world. The figures are backed up by a Boston Consulting survey.

"The central government has issued more than 30 preferential policies regarding finance, taxation and intellectual property in the 21 appointed pilot cities across the country to give priority to the development of the outsourcing industry," said Wang.

In Dalian, in Northeast China's Liaoning province, for example, one of the 21 pilot cities and a pioneer in the business, the service outsourcing industry has contributed 10 percent to the city's GDP, with an annual revenue of 50 billion yuan.

Although it still lags behiind Bangalore, the favorite destination in India in service outsourcing for European and American businesses, Dalian boasts the country's most established software park where there are at least 500 tenants, of which 41 percent are internationally-funded providers, including Fortune 500 companies such as IBM, Accenture, Sony and Oracle.

In Nanjing, the capital city of Jiangsu province, the industry has already become a pillar of the economy, accounting for 50.7 percent of the city's GDP, and is expected to increase by 10 percent over the next five years, according to a forecast made at the summit by Deputy Mayor Li Qi.

"We enjoy a sufficient talent pool supplied by 6 million graduates every year, and an ever-improving infrastructure including Internet connection and transportation system," said Wang.

It is widely believed that the biggest incentive that has attracted multinational companies and boosted local ones is the huge domestic market demand in China, despite the rising cost of labor, the appreciation of the yuan and fierce competition from other service outsourcing destinations in Asia, such as the Philippines and Vietnam.

Peter Sondergaard, senior vice-president of Gartner, a research and consulting firm that has studied the phenomenon, said that the real risk, or challenge is in China itself. Once China integrates its manufacturing strength, which has stimulated its economic growth for three decades, with the new industry, the market will have great potential.

Zhou Ming, vice-president of the China Council for International Investment Promotion (CCIIP), said that the onshore outsourcing market will become a new growth driver, since China also boasts a huge internal demand as the world's second largest economy. It will also grow with the increasing involvement of sectors such as medical care, manufacturing and telecommunications.

According to Hong Gang, vice-president of Orchestrall Group, the medical service will be the sector with the biggest potential for "explosive growth".

It is predicted that by the end of 2015, the investment in medical reform and healthcare in China will reach 2,400

billion yuan, with most of the money going to areas such as the development and maintenance of the IT system in hospitals, logistics and home care centers for the elderly.

"Globally, 10 percent of the business will be completed through outsourcing. Currently in China, the percentage is less than 1, and that's where the potential lies," said Hong, who also works as a senior adviser to the China Sourcing Working Committee under the Ministry of Commerce.

The biggest challenges, however, are the shortage of high-end experienced talented staff and information security relating to date privacy and intellectual property protection. The latter is a particular concern for multinational companies.

"Talent has always been a big concern for service outsourcing in China," said Zhou of CCIIP. "Talented people in the sector usually possess more comprehensive skills such as knowledge of IT or a foreign language, aside from the standard professional requirements."

"It's very difficult to bring in expatriates. It's not impossible, but very difficult, because of the language, the culture, and the other barriers," said Knight, who is also working with a dedicated team with the government to provide consultancy in terms of talent training.

"The hardware is relatively straightforward - for the government to set up a viable environment, like building an industrial park or putting in place the basic incentives. It is difficult to build a talent base quickly, and also to put in place, at least, local policies that encourage information security and give people confidence," he said.