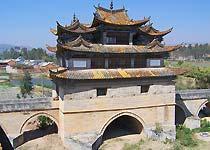 There are regular buses to pass maritimely to go at every bus stop of Kunming.

Building water ancient city is listed in the national historical cultural city. Its ancient city goes through the construction of 12 centuries, keep more than 50 ancient buildings so far, praised as The museum of ancient building With museum of local-style dwelling houses . It represent beauty spot as follows, established in the largest Confucian temple of China of YuanDai; Chaoyang floor built in Ming Dynasty; Typical Zhu garden of local-style dwelling houses; The largest pairs of dragon s bridges in the ancient bridge of Yunnan; Learning the policy and doing in the test in canopy,etc. of the Ming and Qing Dynasties.
Build the intersection of water and ancient city, lie in 220 of the south of Kunming, ancient to claim step hair, also called the pasture of Palestine. Nan Zhao regime in the period of the intersection of Tang and yuans of sum Around 810) Build the favor here and go through the city, belong to the maritime commander-in-chief in ancient China. The favor is gone through for the ancient Yi s language, it is the meaning of the sea. Chinese translates into and builds water. Set up, build the intersection of water and state when the yuan, belong to the intersection of Linan and way (way manage maritime) ,And under construction water put Linan Guangxi Yuanjiang River,etc. place declare console department, govern Linan, Guangxi (today the intersection of Lu and west the intersection of county and place) , ways such as Yuanjiang River,etc.. Ming Dynasty is still called building water state, turned way into an office, Linan office managed and moved to build water, reconstructed water state in order to build water county in Qianlong Year of Qing Dynasty. The Republic of China reconstructs water county in order to face An county in the first year of an era, replies and is called building water county next year. Build waterside town initially for soil city that build, reign of Ming Emperor Hongwu is 20 years (1387) at the Nan Zhao Extend as the brick city. When Li Dingguo captures Linan, the gate tower of the west three of north and south is destroyed in the flames of war, replied and repaired again in the fourth year of Kangxi, and then damage once again. Only east gate Chaoyang floor, although go through numerous chaos caused by war and earthquake, it takes nearly 600 years so far, still stand towering like a mountain. Build water county and establish the temple to study in Yuan Dynasty. Build the intersection of Linan and office, study in the period of being bright and big, Wan go through, build the intersection of water and the intersection of continent and Confucianism again. It is high and shining in the document, four academies of Chongwen song river to successively set up in Qing Dynasty. At that time, there was faced half a roll Claim,at namely Yunnan imperial examinations examination at roll,Linan be about half office, can be rated as the first in Yunnan, become rare in China. In 1994, built water to fix for the third batch of historical cultural cities in China with the approval of the State Council of China.