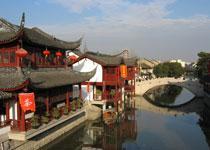 Subway Line No. nine gets under seven precious stations or under the Subway Line No. one Cao s treasure way stop, transfer it to going by Bus No.s 91, 92 under the new town road, walking for several minutes can reach the old street. Also can go to take the bus of special line of travel in the travel collecting and distributing centre of the gymnasium of Shanghai.

An old street in Ming and Qing Dynasties running south and north in the ancient town, only held three people and walked abreast, both sides are bright red to arrange the old retail shop on the door. Flowing water of small bridge, the street lane was the common characteristic in the ancient town of the South in the Ming and Qing Dynasties, but can experience the Shanghai s style sophisticated appeal out of the common in seven treasure.

Introduce: What cricket s hall, old trade reproduced is the local conditions and customs of Shanghai in the past; What old hotel, the fragrant floor of it put out is quite representative Shanghai Cuisine; What seven treasure theatres are performed is Shanhai some main local operas; The microscopic carvings hall, what the book writing brush hall displayed are that Chinese folk art is bound with harmony of the culture of Shanghai s style; Zhang ChongRen s Western sculpture art of the memorial museum has annotated tolerance and reason when the spirit of Shanghai s style gets involved in outside culture especially.

Four wine, tea house outdated old-fashioned square table for eight people, rectangular stool, long the intersection of mouth and the intersection of copper and pot, square hair bamboo chopstick. Sit in the wine flag in the pothouse floating, is tasting the yeast for making hard liquor of seven treasure, is tasting the meat in wine sauce of seven treasure, dismantling the hoof, cloud cake, wear down several hours leisurely, it is in the rare enjoyment of Shanghai of fast rhythm.