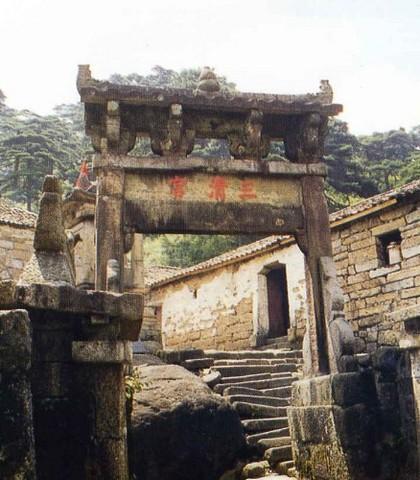 Three palaces of Qing Dynasty of scenic spots, it is a human cultural sight in Sanqingshan, in the center of Taoism ancient buildings, many renowned personalities gather together. District this have an elevation of 1530 meters, have to answer yuans of office nine day ,To air door .

It is not merely a component of traditional cultural heritage of Chinese nationality; It or China will ruminate alchemy and use for smelting a model of the gold and silver. At selecting some the intersection of setting and plastic arts, use one dish of laws naturally Theoretical,combine natural landscape and human cultural sight together,wonderful workmanship excelling nature be lasted scene because of shape ground, fully reflect it, ground, three just quintessence magical effects of people.

Three palaces of Qing Dynasty are under the waist, peak of Beijing of jade of Sanqingshan. Belong to Yushan county 25, belong to the intersection of Yushan and county, three search the country and eliminate rebels today former times. In the period of it is flat for east to promote 357- 361 years) ,Ge Hong forms the hut and makes pills of immortality to cultivate oneself according to a religious doctrine herein together with minister Li.

6 hectares slightly, old monk forms the hut on it, makes three clear views . After extending in the period of bright Jingtai, rename as three palaces of Qing Dynasty. The last of the ten Heavenly stems, Jiaqing of Qing, annual the tenth of the twelve Earthly Branches have 1813 years) Destroy in the fire.

Two halls before and after two county cubic meters in Yushan, Dexing, two layers two enter. The front hall is 5.6 meters high, the back hall is 3.2 meters higher than the foundation of front hall; Two halls are with the whole area of 310 square meters. Hall carry for nine spine, build old wall tomorrow, do, build with colored the intersection of hillock and the intersection of rock and piece all around.

Before and after link up two hall,three frank when entering each time, gates middle, both sides doors small. The front hall erects four generous stone pillars, carry the stone roof beam (the building of the Ming Dynasty) ,At the roof beam is the large rooms Repair newly) . The back hall is four large wooden frames of wooden capital, the top cover is with red tile.

The whole roof beam, column, wall, pool, door ponder and pave building as the main fact with the granite, inlay flawlessly, it is one of the masterpieces of ancient building art. Volume is written above the palace door Three clear Promised Land Four words, for being clear with managing for eight years (1869) Stand.