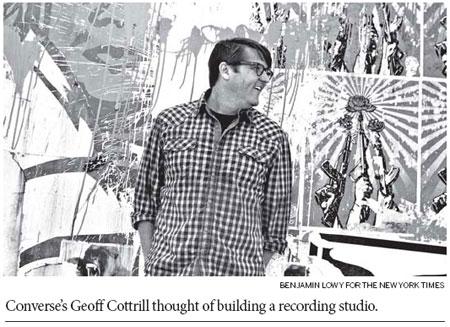 In the latest twist in pop's relationship with corporate America, a studio rising in New York is being built by Converse, which will let artists record free.

A shoe company giving away studio time might seem peculiar. But with its new project, Converse ?whose sneakers have been worn by the Ramones and the Strokes ?wants to become a patron of the rock arts. The company is not alone: "Artists are finding the only way to achieve any financial safety is to become a lapdog of the great corporations," said the author and media critic Douglas Rushkoff, "just like the great painters did in the Renaissance."

Not long ago most youth-minded brands' pop strategies were limited to tour sponsorships and licensing songs for TV commercials. Now they offer money for video shoots, marketing, even distribution. Red Bull and Mountain Dew have record labels with credible rosters. Levi's, Converse, Dr. Martens, Scion, Nike and Bacardi have all sponsored artists, with promotional budgets fatter than most music labels could muster.

For the brands the desired payoff is coolness by association. And while a generation ago these arrangements would have carried a stigma for the artists, branding deals are now common. "Music is everywhere now, and if you have it tied to a brand, there's nothing wrong with that," said Bethany Cosentino of Best Coast, a new girl-group-meets-grunge band from Los Angeles.

When Converse asked Ms. Cosentino to collaborate on a song, she didn't hesitate. "If I said no it would have been stupid," she said.

Converse's studio, called Converse Rubber Tracks, is the brainchild of Geoff Cottrill, the firm's chief marketing officer. Converse says it will have no influence on the music, the artists will keep ownership rights and the songs aren't intended to be used in ads.

Mr. Cottrill said the company wants to "give back" to its loyal customers, but of course the enterprise is not purely altruistic. The idea is that helping new bands will generate sales and also give Converse an advantage over all the other companies out there competing for young consumers.

"Think of a cul-de-sac with four garages, and in those garages are four bands," Mr. Cottrill said. "On the street are all the big brands of the world ?Coke, Apple, the car companies ?standing there waiting for the garage door to open and the cool band to step out so they can tell them they're going to make them famous. But I would venture to say that inside those garages those kids are already wearing our shoes."

Lifestyle brands have been music curators for years; Starbucks even started a label after its success with albums like Ray Charles's "Genius Loves Company." And big companies like Apple and Nike have licensed music by rising but still low-profile artists, said Josh Rabinowitz, director of music at the Grey agency.

In the short term those services are much appreciated by bands. But what long-term effect the brands' power will have on musicians' careers ?or on the music itself ?remains to be seen.

Artists and talent managers say that the deals offered by brands can be fairer and more favorable than traditional label contracts.

But not every branding deal goes smoothly. Two years ago the Island Def Jam Music Group announced Tag Records, a joint label with Procter &Gamble's Tag Body Spray that promised a "multimillion-dollar marketing effort." A Brooklyn rapper, Q da Kid, was signed, but in less than a year the new label collapsed.

"I was with a company that didn't understand the music business," Q da Kid said. "They thought, ‘If we put enough money behind this, he'll be big.' And it wasn't like that."

Why Tag Records fell apart is not clear. But its fate points to the reality that sneaker and soda companies are ultimately in it to sell sneakers and soda, not music.

Mr. Cottrill suggested that the long-term success of Rubber Tracks would depend less on whether the bands that record there go on to fame and fortune than on the extent to which they keep Converse in their heart.

"Let's say over the next five years we put 1,000 artists through here, and one becomes the next Radiohead," he said. "But the 999 artists who don't make it, the ones who tend to get forgotten about, they'll never forget us."

But if young bands are developing with their attractiveness to corporate America in mind, will they, say, avoid political content?

Ms. Cosentino said that when she recorded the track "All Summer," Converse just said it was looking for a "summer vibe."