Struggle towards a world-class, the Opening ceremony of XCMG s Vicennial Celebration

Struggle towards a world-class, the Opening ceremony of XCMG s Vicennial Celebration 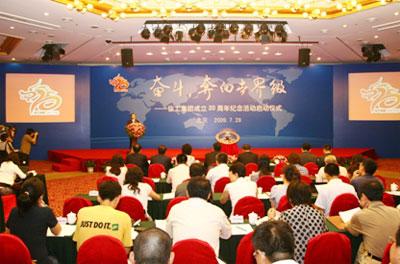 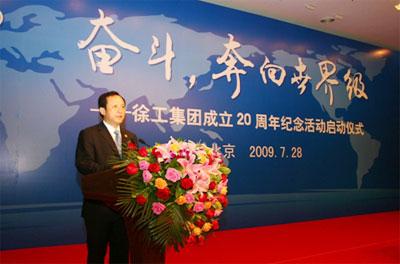 Wang Min, Secretary of XCMG Party committee, Board chairman of XCMG, made a speech

At the opening ceremony on XCMG s vicennial celebration, Wang Min, Secretary of XCMG Party committee , made a review and prospect of the development of XCMG s development over the past two decades. He said that the past two decades is XCMG s hard working growth and development. From the first "decade" s creation, exploration and initial development, to the second "decade" of the reform, innovation and fast development of XCMG, one step at a time, each step confirmed the China Construction Machinery Industry s historical process from small to large, from weak to strong. For two decades, XCMG has been on Top One in China's construction machinery industry.
Wang Min said that two decades XCMG development formed three spirit of integrity, innovation, striving, which are always the best distinct theme through two decades. The staff in XCMG is always taking great responsibilities, acting with great morals and they will making great achievements at the end. There are "four paths" of XCMG s development: management update, technical progress, industrial development, industrial expanding, and global management.
Wang Min said whatever the future economic trend will be , XCMG will strive to achieve this year s 50 billion development goal and to create the scale of 100 billion, rank in the Top 5 of the world's engineering machinery enterprises strategic objectives with every employee s efforts, and never retreat, never wave, always fight. XCMG should always be the Top One in China s Construction Machinery Industry, will also work together with the industry, and become the most important power in the world's manufacturers of construction machinery and equipment. 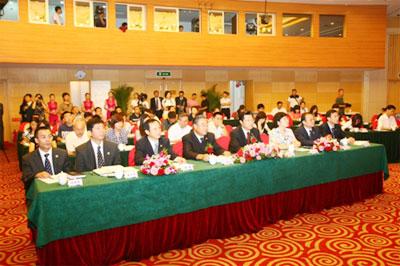 To achieving the world-class enterprise vision, Wang put forward five directions for the world-class" for XCMG:
1st, have a massive scale,
2nd, brand of globalization,
3rd, significant contribution in technological innovation,
4th, unique development strategy and business model,
5th, a team of high professional and specialized of top-level personnel.
Making good use of XCMG s world-class, Jiangsu Xuzhou Construction Machinery Research Institute and the overall listed XCMG ,these "two incubators" ,he proposed, to build a good future, sustainable growth of XCMG" three levels":
First, "Focusing" on truck crane, compaction machinery, loading machinery and grader these four traditional and advantage hosts core business, not only making them No.1domestic, but also making them on the Top at abroad.
Second, "Pressing" on heavy trucks, excavators, crawler cranes, rotary drilling rigs, concrete machinery, vehicle hoists, fork installed, skid steer loaders, backhoe loader, high-altitude operation truck, paving, milling, sanitation, high fire, bridges, machinery, in all 16 XCMG s major businesses, from host machines and engines, gearboxes, hydraulic parts and other core components business, all products must have to achieve the objectives and the pursuit of the First Level.
Third, "Incubating" leasing company, the railway construction machinery, wind power equipment, mining machinery, such as the future of business, and speeding up the mergers and acquisitions of high level of foreign R & D institutions and high-end M & A marketing network to create more areas of future career opportunities and become a world-class construction machinery enterprise with great competitive power and make all Chinese people be proud of.
Qi Guanshan said, vice mayor of Xuzhou, Xuzhou has a long history of engineering machinery industry and geographical advantages and has given birth to XCMG, such an excellent machinery manufacturing enterprises, which as the pillar enterprise of Xuzhou economic development. Over the past two decades, XCMG not only made rapid development itself, but also through the role of industry in Xuzhou City, formed a super-annual sales of 80 billion yuan construction machinery industry chain, which made itself backbone in the revitalization of old industrial bases in Xuzhou and the leader of the multi-billion dollar construction machinery manufacturer, XCMG did an amazing job in this.
On the opening ceremony, the theme of XCMG s vicennial celebration was released on the ceremony, Strive towards the world-class." It embodies the spirit of all XCMG workers that they will work together, and also XCMG s strength pursuit; There is an important tradition in XCMG from the past to the present that is hard working what whether difficult conditions difficulties will be encountered. XCMG workers always go forward and fight tirelessly, and are not afraid of difficult struggle, and courage to struggle with. As for "toward the world-class" painted a bright vision of XCMG, and its determination and relentless pursuit of the group, which shows the overall quality of a comprehensive improvement. 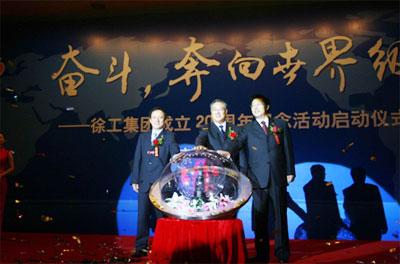 Wang Min, Secretary of XCMG Party committee, Board chairman of XCMG started the with other guests

The activity scheme of XCMG s vicennial celebration was released on the VCR s big screen
"Witnesses XCMG s growth" photo collection
A review of the striving XCMG
This event mainly carries out the prize-winning collection of the pictures "witness the growth of XCMG " vividly, detailed. Try to collect wide range pictures of XCMG s development in all periods, mainly documentary photos, which will reflect XCMG s 60 years history of hard working, XCMG s 20 years struggling history and XCMG s magnificent history of the development for decades by showing the XCMG s changes from people to facilities in the pictures.
The award of two million for first-generation main machines
Witness the development process of product innovation
XCMG is based on three factories: crane plant, roller plant, loader plant.On the occasion of two decades establishment, The award of two million for first-generation main machines was posed by the group, namely the first generation of XCMG s 2Y8/10 roller in 1960 s, Q51 truck crane, the first generation of ZL40G loader. All the machines and clues provided by the society identified as the first generation after verification, screening, and also with the value of collections, collections, will be collected by XCMG. At the same time, the award of 1,000,000 or 50 million for each product will be rewarded. 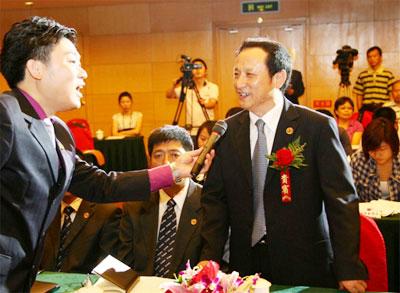 The host interviewed Wang Min, Secretary of XCMG Party committee, Board chairman of XCMG at the opening ceremony

Return of 6.6 million yuan for social care
"Hundred thousand million" Love Care Community Activity
On the occasion of two decades establishment, this activity funded 6.6 million yuan to carry out the witness of "Hundred thousand million" Love Care Community Activity, namely: donating 10 XCMG Hope Primary Schools; supporting 100 poor orphans; implementation of the 1000 poor cataract patients "QiMing activity"; buying three-year health insurance to 10000 extremely poor farmers. This activity will show XCMG s the core value of taking great responsibilities, acting with great morals and making great achievements and value of meeting customers demands, the enterprise objective of the effectiveness of social progress,", not only committed to their own development, industry progress and the revitalization of the national industry , but also pays attention to fulfill its social responsibilities, serves the people and the society, promoting social harmony, progress and prosperity.
It was also announced XCMG s vicennial celebration s logo informed by "loong" shape and "20" characters. There three meanings in it: First, it match the theme of XCMG s vicennial celebration; Second, the Chinese people are the descendants of loong". "Loong" is a traditional Chinese cultural totem, its history and trandition went hand in hand with Chinese cultural, and also a symbol of excellence, showing XCMG s leading position in domestic construction machinery industry; Third, "loong" shape with "20" characters have high-spirit, giving the good bless for the enterprise s prosperity. XCMG will strive for its world-class target , welcoming another XCMG s new era!
Wang Ruixiang, Chairman of China Machinery Industry Federation, Qi Guanshan, Vice-Mayor of Xuzhou Government, Wang Min ,Board chairman of XCMG, press the button of XCMG s vicennial celebration together. With the crystal ball enlighten, XCMG s vicennial celebration was officially launched . The participants responded with warm applause, witnessing together this exciting moment in history