On November 18th, HPC30 shotcrete truck, which was independently developed by XCMG Construction Machinery Company, started off for Shanghai to the accompaniment of firecrackers, as the representative at the highest level of Chinese concrete machinery to appear on the BAUMA exhibition.
HPC30 shotcrete truck is the result from the creative combination of XCMG's chassis manufacturing technology with shotcrete machine technology. With maneuverability greatly enhanced, it enables fast site-switching operation and its maximum speed of 75km/h makes it suitable for work emergencies as well as general shotcrete operations. HPC30 shotcrete truck adopts a double-drive system of diesel engine and electric motor, each allowing independent shotcrete operations. In operation, its spray can reach 17.2m high, 28.6m broad and 14.3m away at the maximum. Its two-stage telescopic articulated boom, which allows 9 degree of freedom, makes the operation even in a small space agile and free. All its performance has reached the international advanced levels.
HPC30 shotcrete truck has supplied the gap in the field of project rescue equipments in China and even in the world, and it indicates as well that Chinese concrete equipment industry has technically reached the world level in terms of integrated innovation. 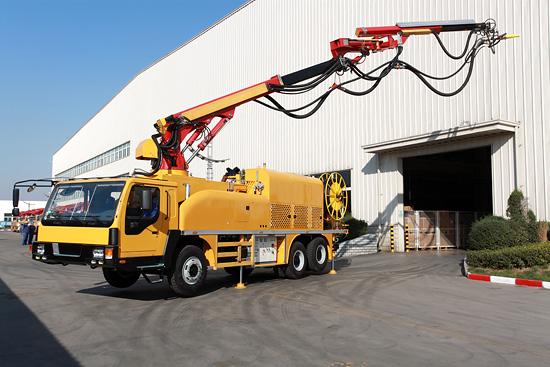