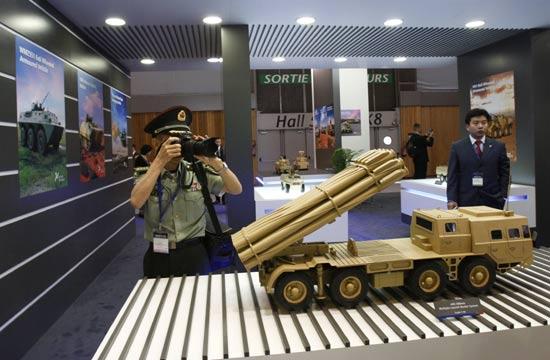 A model of the AR2 300mm Multiple Launch Rocket System of China North Industries on display at the Eurosatory arms fair. [Agencies]

BEIJING - The debut of Chinese military equipment at a European defense trade fair this week signals a more confident China that wants a bigger share of the world munitions market, analysts said.

Six Chinese companies are displaying munitions products at the Eurosatory air and land defense and homeland security show north of Paris, which ends on Friday.

The fair has attracted 1,331 exhibitors from more than 50 countries and regions.

"The Eurosatory fair is a place where advanced military equipment is on display and potential buyers are sure to compare them. Chinese companies putting their products on display shows they are more confident than before," said Zhao Xiaozhuo, a researcher at the department of world military studies of the PLA's Academy of Military Science.

The quality of Chinese-manufactured military equipment has been improving rapidly in recent years, pushing up exports of advanced weaponry, he said.

"The move (participation in the fair) is a signal that China wants a bigger share of the global market of high-tech defense equipment," he said.

Of the six firms in attendance, China North Industries Corp (Norinco), a State-owned defense equipment producer, has taken a 150-square-meter stand to exhibit its products, including models of armored vehicles, multiple-launch rocket systems and howitzer artillery.

The other companies include China Xinxing Import & Export Corp and Poly Technologies as well as three other defense companies showcasing their products through display stands, miniatures and multimedia.

"China's munitions producers have invested huge sums, but there is not much demand within the country," Li said.

If the companies tap new markets, they will be able to maintain a positive production cycle, he said.

"We need orders," said Cai Xiaomei, a deputy manager at China Xinxing Import & Export Corp, a maker of military supplies such as bullet-proof jackets and helmets. "We hope to meet many big customers at this fair."

China entered the world market in 1979, but for many years, its munitions were excluded by some world powers, which also explains why Chinese munitions producers did not turn up at past fairs, he said.

"This year's participation shows that after years of reform and opening-up, Chinese defense products are more and more accepted internationally" he said.

Also, the debut reflects a change in the mindset of authorities, who used to regard attending such fairs as inappropriate, he said.