BEIJING: Zhejiang Ocean Shipping Co is planning an initial public offering (IPO) of its shares on the Shanghai Stock Exchange this year to bolster capital and strengthen its competitiveness in the ocean shipping industry, a source familiar with the matter said on Wednesday.

The company, also known as Zosco, is the largest ocean shipping company in Zhejiang province. It plans to issue up to 100 million shares and raise up to 2 billion yuan through the public float, the source said.

The China Securities Regulatory Commission is currently reviewing the IPO proposal, he said.

The float is expected to provide funds for the company's new fleet of 10 Capesize bulk carriers scheduled for delivery in 2012, said the source.

Iron ore and coal ocean shipping are the company's main businesses, it said in the IPO proposal.

Iron ore and coal shipping account for nearly 50 percent of the company's bulk cargo volumes. Both the businesses are revenue earners for the company, said Zhang Hui, an analyst with Donghai Securities. 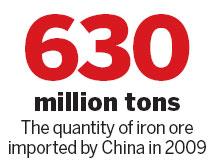 The economic downturn pushed global trade down 12 percent last year, the worst since 1945, according to a World Trade Organization report. Bulk cargo will lead the shipping sector out of the global recession, analysts said.

Industry analysts said the number of new ship deliveries would increase considerably in the next three years as result of the strong orderbook before the economic slowdown.

"But for now, the industry may continue to record only small profit margins as the current capacity far exceeds freight demand, thereby keeping freight charges at low levels," Zhang said.

"It might take two years to digest the overcapacity, and I expect the industry to improve in 2012," Zhang said, adding he has a neutral stance on Zosco.