Curbs on realty buys to remain in 2011

Curbs on realty buys to remain in 2011

Local governments in many cities will continue restricting home purchases into the new year, in response to the central government's efforts to further curb property price increases in 2011. 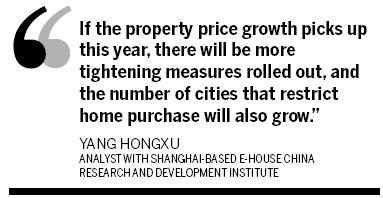 Fuzhou, Xiamen and Haikou, which saw their home purchase restrictions expire on Dec 31, said they will extend the moves in 2011, according to Xinhua News Agency.

So far, there are more than 10 cities in the country imposing restrictions on home purchasing, either by limiting the number of homes a family can purchase or by stopping mortgages for foreigners.

The local governments of the three cities have a term of validity for the move, while similar policies of others are temporary.

Meanwhile, relevant government departments in Beijing, Shenzhen and Guangzhou also said recently they had no plans to cancel their home restriction policies.

"If the property price growth picks up this year, there will be more tightening measures rolled out, and the number of cities that restrict home purchase will also grow," said Yang Hongxu, an analyst with Shanghai-based E-house China Research and Development Institute.

Minister of Housing and Urban-Rural Development Jiang Weixin said at a national conference that China will crack down on speculative home purchases and curb excessive growth in property prices this year.

The government will also strengthen the implementation of tightening measures unveiled in 2010.

The country has rolled out a string of tightening measures to cool the market, including suspending mortgages for third-home purchases, speeding up trials of property taxes, raising down-payment requirements for first-time home buyers as well as only allowing foreign citizens living in China to buy one home for their own use.

All these policies have "helped contain speculative demand to some extent", Jiang said.

Despite the rigorous real estate policies, many large-scale property developers have met their sales targets in advance.

Statistics from World Union Properties showed that at the end of November, Vanke, Evergrande Gemdale and Sino-Ocean Land had realized their annual sales targets as they strengthened their presence into second- and third-tier cities and consolidated their financing channels.

To hedge risks, a number of leading property developers including Greentown, Vantone, Beijing Capital Land and Hair Real Estate have also been preparing to set up their own real estate funds.

Shenzhen-based Gemdale has set up its first yuan-denominated fund with the scale at about 500 million yuan ($73.5 million).

According to World Union Properties, the world's major investment banks have set up 33 yuan-denominated funds in China, with most of them eyeing opportunities in the real estate sector.