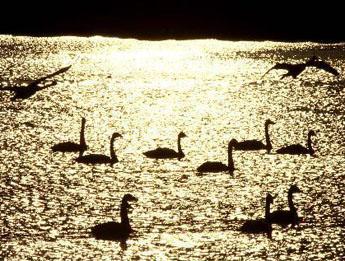 Swans are seen in Yandunjiao of Rongcheng, east China's Shandong Province, Nov. 28, 2010. Over 3,500 migrating swans have settled down here to live through the winter until now.

Mentioning Yandunjiao in conversation isn t likely to get much of a response. To most, it s just a remote, nondescript fishing village. However, a lake nearby happens to be the largest winter habitat for whooper swans in China. Every November, thousands of swans fly hundreds of kilometers south to spend the winter there.

Literally, Yandunjiao translates to beacon tower point, deriving its name from the building atop Gushan Hill to the east of the village. In mid-November, flocks of swans fly thousands of miles from Xinjiang Uygur Autonomous Region as well as from Mongolia and Russia to stay in Yandunjiao until early March.

Local swan protection organizations feed the swans twice or three times a day. Swans will be flying here to spend the winter till the end of December, according to the principal of swan protection center.