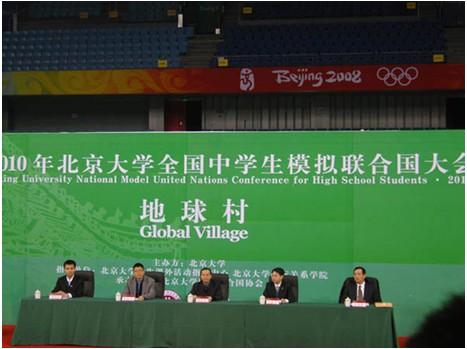 Recently, 11 teachers and students from Jinan Foreign Language School participated in the 2010 Peking University Model United Nations . Model United Nations (MUN) is a conference held by imitating the United Nation and its related agencies, according with its mode of operation and rules of procedure, and focusing on hot international issues. Young students play the diplomat roles of different countries, and take part in the "United Nations Conference" as representatives of different countries. Under the host of the conference presidium, following the rules of the conference, the delegates present their own countries point of view via speeches and debate and lobby in the interests of their own countries. They communicate and cooperate with friendly countries to resolve conflicts and discuss the draft resolution to promote international cooperation, and they also give full play to their talents in the stage of "United Nations". The Model United Nations originated in the Harvard University. After 60 years of development, it has become a grand international gala for elite international students. In this meeting, Jinan Foreign Language School represents Iceland and Sierra Leone which belong to GA-DISEC (United Nations General Assembly - Disarmament and International Security Committee) and UNDP (United Nations Development Programme) respectively. The proposals under discussion are light weapons, boy scouts, the Arctic oil and gas resources and post-disaster reconstruction. Their analysis has reached a considerable height both in depth and professionalism. This is the first time for Jinan Foreign Language School to participate in the Model United Nations, and it is also the first MUN team of Jinan.
Despite of the lack of experience, the first participation has won the MUN team of Jinan Language School great success and the "Best New School Organization Award". Li Huiruo, a student who represents Iceland in GA-DISEC was rewarded the "Best Standpoint Prize." (Jinan Municipal Bureau of Education)