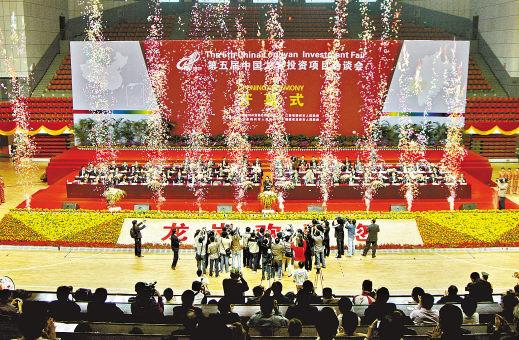 Secretary-general Long Yongtu of the Boao Forum for Asia declares the opening of the 5th China Longyan Investment Fair and presses the button to start the fair. (Photo by Wang Yi and Zheng Qiusheng)

Over 1,500 guests and journalists from US, Brazil, Canada, Singapore, Indonesia, the Philippines, Malaysia, Hong Kong, Macau, Taiwan and so on attended the opening ceremony, they will attend the Fair, and Regional Cooperation Forum for the Economic Zone West of Taiwan Strait, signing ceremony of twin-chambers between Longyan General Chamber of Commerce and Philippine Chinese Chamber of Commerce and Industry Inc., and the 13th General Meeting of the Leaders from 13 Cities of Fujian, Guangdong and Jiangxi.

Mr. Zhang Jian, Secretary of CPC Longyan Committee, addressed the opening ceremony. He first expressed worm welcome, on behalf of CPC Longyan Committee, Standing Committee of Longyan People s Congress, Longyan Municipal Government, CPPCC Longyan Committee and the 2.89m Longyan people, to all the distinguished guests present at the investment fair, and heartfelt thanks to all leaders and friends from all circles both home and abroad for their support to Longyan s development. As he said, the 5th 11 18 Investment Fair was held at the moment when we were faced with rigorous challenges for the economic growth and special opportunities for the investment development. Both new and old friends gathered here to meet the challenges, to share the opportunities, and to join in the effort to promote development. The Investment Fair this year had wider participants, besides the 13 cities from Fujan, Guangdong and Jiangxi, Foshan City of Guangdong and Pengzhou City of Sichuan also took part in the fair. The 11 18 Investment Fair was becoming a new platform for the exchange between the Economic Zone West of Taiwan Strait and the Pearl River Delta and middle-west part of China, and the regional collaboration and linkage development. More and more investors attended the Fair, which was more and more successful. The Investment Fair was determined to provide broader opportunities for investors in our joint effort of meeting the challenges and seeking win-win cooperation.

Zhang Jian said, thanks to the proper leadership of CPC Fujian Committee and Fujian Provincial Government, and the full support from central government, provincial departments, neighboring cities and friends from both home and abroad, as well as the 11 18 platform for regional collaboration, Longyan economy had gained healthy and rapid growth. Currently, the city was responding actively to the new changes in macro economic situation and seizing the significant opportunity of the state and province s policies in expanding domestic demands and promoting sustainable economic growth. We are making efforts to be a leading part in the scientific development and exchange and cooperation between peoples across the Taiwan Strait. We would seized every favorable opportunity for development, and take every measure in favor of growth, to build up a open and win-win platform in favor of investment, and to provide our best service to each investor. We would spare no effort in promoting the sustainable and rapid growth of economy and creating a bright future of prosperity.

Mr. Yang Biao, Director of Department of Foreign Trade and Economic Cooperation Department of Fujian Province, gave an enthusiastic speech on the opening ceremony. He said, as the construction of the Economic Zone West of the Taiwan Strait going further, regional competitiveness had shown up. He recalled the four agreements co-signed by Association for Relations across the Taiwan Strait President Chen Yunlin and Straits Exchange Foundation Chairman Chiang Pin-kun in Taipei on 4th November, which symbolized the long-expected wish for direct cross-Strait links on transport and postal services would come true soon. There would be two airports with normal direct flights, eight ports with direct routes and two distribution post offices in Fujian, which would greatly promote the construction of the Economic Zone West of the Taiwan Strait. In April this year, the Program on the Coordinating Development of Urban Agglomeration West of the Taiwan Strait was approved by the state, succeeding Beijing, Tianjin and Hubei urban agglomerations. Longyan, Ganzhou, and Meizhou are important part of the Economic Zone West of the Taiwan Strait, and are playing an important role as a fringe area among the pan-Pearl River Delta economic rim and the connection between Yangtze River Delta, Pearl River Delta and Fujian. It s the forefront window of expanding inland area for the south-east coast and exploring international market for the inland provinces, as well as an important base of promoting the economic cooperation across the Taiwan Strait. With the carrying out of the strategy of constructing the Economic Zone West of the Taiwan Strait, the unique advantage of regional cooperation between Minxi and its bordering areas would be further excavated, the regional influence would be consistently extended, and the clustering of feature industries would be upgraded. The bordering area of Fujian, Jiangxi and Guangdong would become a prospering and vibrant region on the rise that has complementary advantages. He sincerely hoped that every investor might take advantage of China Longyan Investment Fair to seek suitable investment opportunities and to create a more brilliant future together.

At 9:20am, Secretary-general Long Yongtu of Boao Forum for Asia declared the opening of the 5th China Longyan Investment Fair.