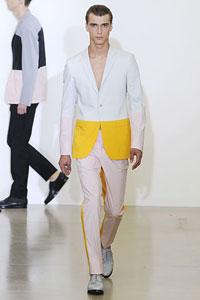 Jil Sander caused at stir at Milan fashion week on Saturday, delivering one of the most directional shows we have seen in recent seasons for its Spring Summer 2009 collection. Moving away from the Pollock-esque graphic and paint-splattered tailoring, Raf Simons made strong references to eighties colour blocking and silhouette contrasts, breaking up surfaces with fabric and colour interplay, such as a two-tone jacket or trouser.

Modern cuts and sophisticated fabrics formed the basis of the collection. Technical shapes and sharp silhouettes kept the Mondriaan colours within the Jil Sander spirit. Buttons were replaced by zips fitted with silver triangle and square ring pulls, emphasizing its geometrical shapes, again with an eighties flashback.

Simons' futuristic approach to the German minimalist house has received mixed reactions. Simons told Suzy Menkes of the Herald Tribune: "I don't usually think retro, but I thought about things from the past and how to transfer and transport them into our language." Menkes in return wrote: Jil Sander "turned jackets and pants into perambulating art. But the effect was of mind games, turning Simons's skill with modern tailoring into something so abstract that it looked alien.

Whilst the show was mesmerising and cerebral, one wonders who the customer that will be able to wear the clothes.