Bangladesh will sell rice at 40 percent below market price to millions of garment workers hit by the global economic crisis, an official said Monday. 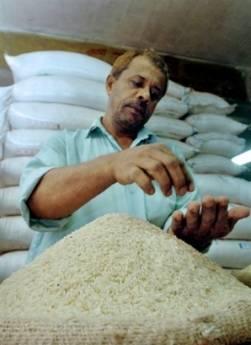 A market stall owner checks his stock of rice in Dhaka, Bangladesh.

Food ministry spokesman Golam Kibria said the workers - who earn as little as 25 dollars a month - would be able to buy rice from government outlets at 18 taka (26 cents) a kilogram, instead of the market rate of 25 taka.

The government will sell subsidised rice to garment workers and tea garden labourers from March. Garment workers earn very poor salaries and have been affected by high food prices and the global crisis, Kibria said.

Bangladesh's three million garment workers are mostly women who leave their villages to work in factories near the capital Dhaka and the port city of Chittagong.

The majority of Bangadeshi households spend 70 percent of their income on food.