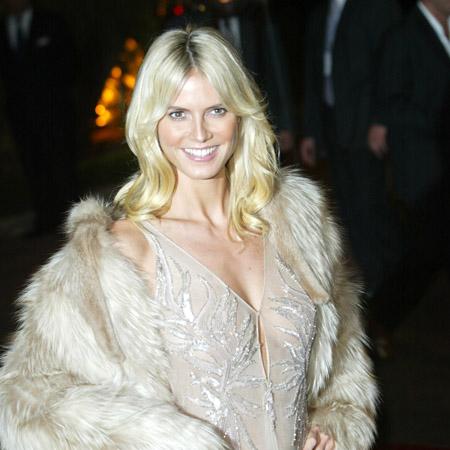 Heidi Klum will still be a model when she is 80 and 'on crutches'. The 35-year-old beauty - who raises three children with her husband, singer Seal - has no intention of ever quitting the catwalk.
Heidi laughed: 'I'll be 80 on crutches at the Victoria's Secret fashion show hopping down the runway, groaning for my grandkids to help me down!' The German-born star - who is the new face of the Victoria's Secret Perfect One bra - also revealed she has made many fashion mistakes in the past, but feels sexier than ever.
She told Fox News: 'I've done things like wearing a sexy dress with granny pants underneath or bloomers with my tight jeans instead of a G-string.
So I've learned feeling sexy is like an onion - the layering, not the scent!' Heidi admits motherhood has made it harder to keep in shape and she has to follow a sensible diet and exercise regime. She said: 'The only advantage after having children is having a bigger smile on my face. But as far as my body goes, there was definitely more disadvantages. I really have to eat better and work out more now.'
Heidi has a four-year-old daughter, Leni, from a previous relationship. She also has two sons with Seal - three-year-old Henry and Johan Riley, two.