The AWEX Regional Indicators finished 1.0% lower, on average, at sales in Sydney, Melbourne and Fremantle this week when the US exchange rate fell by 0.3%.

The US exchange rate was more stable until Wednesday this week, and showed little reaction to the lift in the Chinese official interest rate. Financial commentators attributed Thursday's fall to a variety of factors, including a mixed reaction to the latest jobs data, which included an unchanged unemployment rate; and some disappointing economic data.

The market started on a good note with further good rises for fine wools and small rises for most other Merino micron ranges on Wednesday. The easing on Thursday affected all micron ranges, but left them all at very good levels. Some poorer quality wool and a large offering of crossbreds in the South contributed to the fall on Thursday. On a broader perspective, some of the dominant buyers of recent weeks were less active this week.

Merino skirting types had a generally good week, with rises in all centres on Wednesday and in the North and the West on Thursday, particularly at the fine end. Prices came back in the South On Thursday, with the poorer types most affected. Crossbred prices eased over the week, partly due to the large quantity on offer in the South on Thursday. Oddments were generally in strong demand on Wednesday and remained in good demand on Thursday. The average AWEX Merino Cardings Price Guide was up by 2.6% for the week.

Buyers for China were dominant, with continued strong demand from buyers for Europe, India and Taiwan again maintaining the momentum in the market.

Sales will be held in Sydney, Melbourne and Fremantle next week, (Week 33) when 47,952 bales are currently rostered for sale. Present estimates for the following two sales (Weeks 34 and 35) are 42,000 and 41,400 bales, respectively; a decrease of 1.8% over the three sale period when compared with last year.

The Melbourne offering of 24,748 bales includes 7,800 bales of Tasmanian wool to be offered on Tuesday. This is the traditional Launceston February fine wool sale, which is occurring as a Sale-by-Separation in Melbourne for the first time.

The New Zealand Merino Company is rostered to offer 600 bales in Week 34.

In South African sales, the Cape Wools Indicator was up by 4.1% since last week against a 1.3% depreciation of the Rand against the US Dollar and a 0.1% appreciation against the Euro. 6,973 bales were on offer. 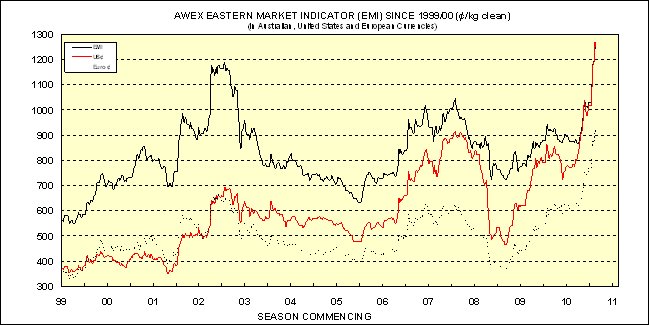