China plans to supply 45 percent of its iron ore use by 2015, a big increase from last year's 32 percent, as the country steps up efforts to protect its steel industry from a foreign monopoly over iron ore. 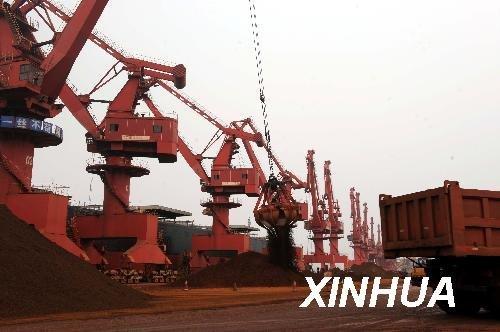 China plans to supply 45 percent of its iron ore use by 2015, a big increase from last year's 32 percent, as the country steps up efforts to protect its steel industry from a foreign monopoly over iron ore. [File photo]

The country also aims to get half of its iron ore imports from Chinese-invested mines to break the grip of the three major global miners, Vale SA, BHP Billiton and Rio Tinto, according to a report from Monday's Economic Information Daily, a Beijing-based Xinhua-run newspaper.

China, the world's biggest consumer of iron ore, has been boosting domestic production of the mineral and increasing overseas investment to secure supplies as its steel firms, mainly dependent on imports, have been subject to price fluctuations.

The average price in the period increased by 38 percent from the same time last year to reach 163.75 U.S. dollars per tonne. The price increase added 130 billion yuan (20.47 billion U.S. dollars) in costs for China's steel firms, according to MIIT.

Whether China is able to guarantee the iron ore supplies matters to the development of the country's steel industry, said Luo Tiejun, deputy director of MIIT's raw material department.

"The whole steel industry has been living on a meager profit," said Zhu Jimin, president of Shougang Group.

The profit ratio of medium-sized and large steel enterprises is 3 percent, lower than the 6 percent of the industrial sector in China, according to MIIT.

"The international monopoly has pushed the price of iron ore more quickly than the growth of steel prices," said Zhu.

China is working to establish a guarantee system for iron ore supply, according to the country's 12th Five-Year Development Plan (2011-2015) for the iron and steel industry, made public on MIIT's website on Monday.

According to the plan, China will encourage steel firms to cooperate with resource-rich countries, especially its neighbors, to co-exploit iron ore mines.

The country is expected to add more than 100 million tonnes in iron ore capacity abroad by 2015, said the plan.

According to the plan, China will continue to step up domestic exploration and mine consolidation. It also vows to improve the order of iron ore market in China.

The country's annual crude steel consumption will reach around 750 million tonnes by 2015, said the plan.