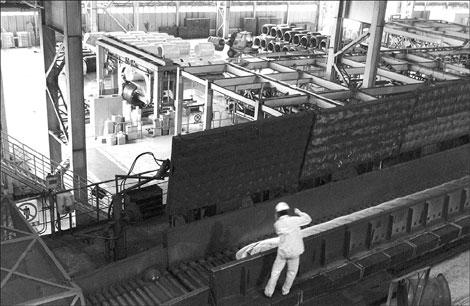 The National Audit Office (NAO) is investigating major domestic steelmakers' implementation of a nationwide adjustment and revival plan across the steel sector between June and November this year.

The investigation comes in the last year of the three-year revival plan the State Council announced in March 2009 amid the steel sector's worsening situation caused by the global financial meltdown.

Under the plan, Chinese steelmakers must make structural adjustments and industrial upgrades to offset the effect of an industrywide downturn, and to increase attention in the the domestic market after a previous focus on the export-oriented industry.

"The revival plan's implementation determines the steel industry's growth outlook. The NAO investigation will vouchsafe the smooth implementation of this far-reaching plan. This is viewed as one of our major tasks this year," said Wei Qiang, director-general of the NAO's enterprise audit department.

The on-site audits are scheduled to conclude in November.

According to Wei, the audit offices are tasked with finding out how the adjustment and revival plan has been implemented, studying detailed measures taken by the companies and local governments. The NAO will offer suggestions based on its analyses.

"The NAO's role is more like a communication channel in this task. The office will help Baosteel better implement the central government's call for a broader perspective. Conversely, it will also report on the difficulties Baosteel has encountered to the central government to break any deadlock and remove hurdles before we realize the revival goal," said Zhao Kun, vice-president of Baosteel.

The NAO's Zhengzhou commissioners said that although China has great production and demand, domestic steelmakers have much less say in negotiating iron ore prices than their foreign counterparts.

"The investigation will hunt for iron ore problems from the perspective of guaranteeing the nation's economic security, promoting the safety of national resources and the sustainability of steel industry," said Zheng Xinju, a Zhengzhou commissioner.

"Throughout the investigation, we will try to help build an effective negotiation mechanism, with the support of local governments and steel enterprises, and to build on our strengths when seeking overseas resources," said Zheng.