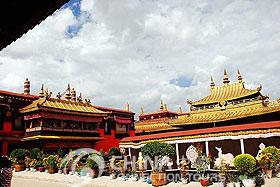 The Jokhang Temple, situated in the centre of old Lhasa, was originally built in 647 A.D. It is said that the site was chosen personally by the wife of King Songtsan Gampo, the Tang Princess Wen Cheng. It was built by craftsmen from Tibet, China and Nepal and thus features several architectural styles. The Jokhang is the spiritual centre of Tibet and the holiest destination for all Tibetan Buddhist pilgrims.

In the central hall is the Jokhang's oldest and most precious object -- a sitting statue of Sakyamuni when he was 12 years old. This was carried to Tibet by Princess Wen Cheng from her home in Chang'an (the present Xi'an city) in 700 A.D. It is a gilded statue adorned with many jewels, in an elaborate setting.

Pilgrims have prostrated themselves in front of this statue for centuries. In front of the Jokhang stands an old and withered willow tree said to be planted by Princess Wen Cheng. In front of the willow is a 3 meter high pillar, which is a treaty stone recording the alliance between the King of Tibet and the Emperor of China in 823 A.

The three-level roof of the Jokhang offers splendid views the Potala Palace. The golden roofs are superbly crafted with many birds, beasts, bells and other intricate figures.