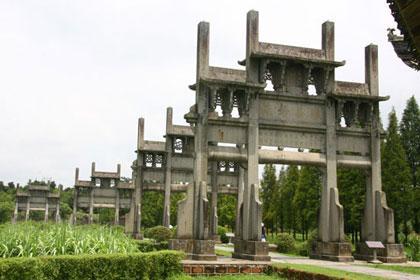 6.5 kilometers away from Shexian county, Tangyue village is one of the historical and cultural cities in China. There are 7 Memorial Archways in Tangyue village, 3 were built in Ming dynasty, others were built in Qing dynasty. All of them are in order of loyalty, filial piety, moral integrity and justice. In recent years, it has become a world-famous tourist spot of top culture grade.

Memorial Archway, different from either houses dwelled by humans or temples where gods are worshiped, is a unique kind of memorial architecture.

From the South Song dynasty on , especially in Ming and Qing dynasties, the Ling Star Gate was not only built near the suburb altar and the the Confucian temple, but atso near ordinary temples, tombs, ancestral shrines, office buildings, gardens or beside the streets and cross. It is not only used to worship heaven and Confucius, but also in praaise of noble acts and chastify.

The purpose of the construction of the memorial archway can be classified into three types: symbolic archway, archway of credit and morality, and archway of achievement.

It was built in honour of Bao Zongyan, a loving father, and Bao Shousun, his dutiful son; the two "Filial Piety Arches 'in honour of Bao Can and Bao Fengchang for their filial love; the two "Chastity Arches "in honour of Bao Wenlin's wife Wang and Bao Can's grandson Bao Xiangxian, who had been Vice -Minister of War. The seven arches were built during the Ming and Qing Dynasties, characterized by the artistry of Huizhou stone carving, which is of great value to the study of ancient architecture.

Also known as "Qingzi Temple", the Temple of the Bao's deceased mothercommonly called "Female Temple", the branch temple of Bao's, commonly called "Male Temple". It also take use of man-made scenery and status in ancient style, as well as modern methods such as sound, light and electricity, in order to reproduce its original appearance. With images true to life, they are the evidences to research patriarchal systems and merchant's history in Huizhou.