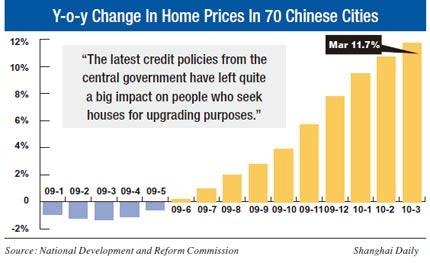 More buyers are not in a hurry to purchase homes and adopt a "wait-and-see" stance as central government policies aimed to rein in speculation in property over the past week are raising their hopes that record high housing prices may finally start to fall.

"The latest credit policies from the central government have left quite a big impact on people who seek houses for upgrading purposes," said an agent at a Centaline branch on Taopu Road in Putuo District, who preferred not to be identified. Shanghai Centaline Property Consultants Ltd runs the largest real estate chain in the city.

"However, home owners seemed rather unaffected by tightened credit policies at the moment as many of them would rather wait until clearer signs on home prices emerge and to see whether more drastic measures will be launched," he said.

China last Thursday raised the down-payment requirement on second-home mortgages to at least 50 percent from 40 percent and reiterated that buyers must pay an extra 10 percent on interest rates for these homes. On Saturday, a notice issued by State Council said banks can suspend housing loans to third or more home buyers in places where house prices rise too rapidly and too high and home supply is insufficient.

The notice also asked banks to stop loans to buyers who haven't paid personal income tax or into the social security fund in the past 12 months, and allowed local governments to cap the number of homes a buyer can own.