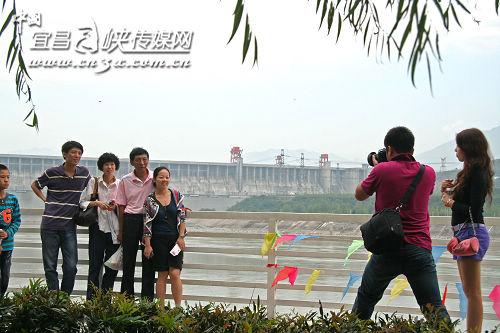 During"the National Day Golden Week"this year,the Three Gorges Dam was a hot spot and received 85000 domestic and overseas visitors,breaking the historic record of this tourism area. On October 4,it received over 20000 tourists, hitting an all-time high.
On October 4th, among those 20000 tourists,9000 of them came by ship and then entered the Three Gorges Dam scenic spot by travel shuttles. That day, self-driving tourists account for 15% of total tourists,much higher than that of last year.
During this year's"the national day golden week",the Three Gorges scenic spot organised a free interactive performance together with a Three Gorges Dam tourism theme float to create the atmosphere. They also set a wheel of fortune for tourists to draw a lottery in order to add more fun. Every evening, Three Gorges in Golden Age, a large-scale ecological performance which is invested by the scenic spot, attracted many tourists.

During the short 8 days, the enthusiasm for travelling was totally released. There has been a continuous hot in Three Gorges Dam Tourism.Meanwhile, as the 60th anniversary of our motherland 's birthday and the Mid-Autumn Festival is drawing near, the general mood of the tourists was good and there has been a general increase in the tourists'cultivation.

In addition, thanks to the news coverages on Three Gorges Dam made by China Central Television, tourists came to Three Gorges Dam continued to increase. They were deeply impressed by the great power of our country in a excited and proud mood.