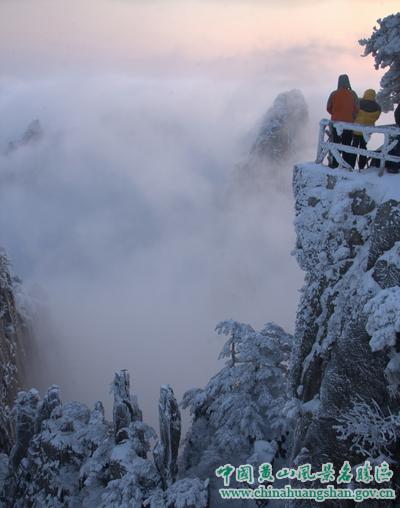 The glow of the sunrise and sunset draws the crowds to popular viewing spots. Buddha s Light (an optical phenomenon like a halo surrounding the observer's shadow, once thought to show the observer s enlightenment) may be witnessed.

Compactness means more mountain scenery for less walking. Huangshan Scenic Area is a mountainous area of 160.6 square kilometers (59 square miles).The main attractions are in a corridor 6km from west to east and 12km from south to north. It s about 500m above sea level at the south gate and the highest peak, LotusPeak, is 1864.8m high. The 1400m+ peaks are all within 6km. The 1200m+ zone is about 10km in diameter, beyond which the mountains tail off rapidly in height. Although Huangshan is not very impressive in its dimensions, its features are extremely rugged and sheer.

There are hundreds of peaks and thousands of ravines in the YellowMountains, 72 of which have been named. HeavenlyCapitalPeak (1810m), LotusFlowerPeak and Bright Summit (1860m) are the three major peaks, all rising more than 1,800 meters (5,900 feet) above sea level. They often have their heads above the clouds, giving them a majestic appearance. YellowMountain Scenic Area has two lakes, three waterfalls, 16 springs and 24 brooks all noted for their outstanding beauty.

There are only two sizeable mountain chains in Anhui, which line up from tail to head, from west to east. Huangshan represents the head of the taller eastern chain, facing east towards the Pacific. Huangshan owes its magnificent and regionally best propensity for collecting clouds to its favorable location and suitable size, making it the first to really catch moist Pacific air drifting in from 300+ km (200+ miles) away, past Hangzhou. If Huangshan was less elevated or further from the open ocean it would not act like the cloud-catching hand, peaks raised like fingers for mortals to stand on and view from, that it does.