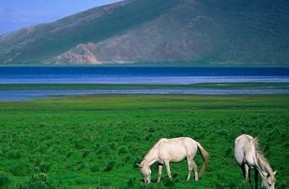 Lhasa is the capital city of the Tibetan Autonomous Region of China. It's an ancient plateau city with a history of over 1,300 years and boasts its unique styles. Lhasa is on the north bank of Lhasa River, a tributary of the Yarlung Zangbo River, in the southeast part of the autonomous region. It is home to people of Tibetan, Han, Hui and Menba nationalities etc, with Tibetans dominating the place. Lhasa is the political, economic, cultural and transportation hub of the Tibetan Autonomous Region. There are lots of temples and monasteries in Lhasa, which is a holy place for Tibetan Buddhism. It’s also nicknamed "sunshine city".

The long history and unique culture of Lhasa has made the city a brilliant pearl on the snow-covered plateau. World-famous ancient buildings are scattered all over the city, with row upon row of magnificent monastery buildings, including the famous Jokhang Temple, Ramoche Temple, the Potala Palace and Norbu Lingka-the summer palace of the Dalai Lamas.

In the middle of the 7th century AD, Tubo King Songtsam Gambo founded his regime in Lhasa. In 641 AD, Songtsam Gambo married the Tang Dynasty Princess Wencheng after he had completed the great cause of unification. After her arrival in Tibet, Princess Wencheng suggested that white goats should be used to carry the earth to fill the lakes for the construction of temples.

Therefore, local people renamed the temple (what’s now Jokhang Temple) "Rasa", which means “the back of a goat” in Tibetan. Later, "Rasa" was translated as "Luoxie" in Mandarin and gradually changed to "Lhasa". For thousands of years, Lhasa has become a Tibetan political and religious center for quite a few times. It is indeed a "holy place".