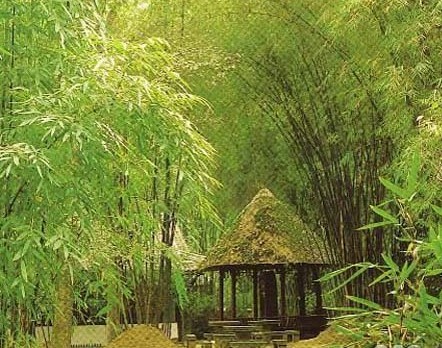 The Thatched Cottage of Dufu, located by the side of the Huanhua Stream in Chengdu's western suburb. It was the residence of Dufu, the great poet of the Tang Dynasty when he took refuge in Chengdu.

Du Fu (712-70 AD), one of China's most famous poets, left home at the tender age of 20, becoming a court official at the former capital in Chang'an (near Xi'an). Du Fu's civil service duties did not last long however, and he was captured by rebels and forced to flee the city for Chengdu after only a few years. It was in Chengdu, at this small and simple house, that Du Fu was inspired to write more than 200 poems which are regarded today as masterpieces of realist poetry.

Dufu's Thatched Cottage covers an area of 16 hectares. The Gate, the Screen Wall, the Lobby, the Hall of Verse History, and the Gong Bu Temple are lined one by one along the middle axis, flanked by corridors and other auxiliary buildings. The bronze statue of Dufu in the Hall of Verse History is broad-minded. The enshrined clay sculpture of Dufu in the Gong Bu Temple is very lifelike. Among and between them are trees and bamboo groves, winding brooks and linking small bridges.

All these give the place an atmosphere of solemnity, meanwhile a sense of beauty and grace. Around the hones are bamboo fences and inside the fences are vegetable and herb plots, easily remind people of the scenes described in Dufu's poems. While taking a quiet walk in such a historical and cultural environment, visitors are apt to be brought back to the ancient times.