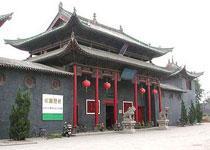 Luoyang cities nine are all in the north of East Road

The museum of folk custom of Luoyang is the Chinese special topic museum. Lie in the south of new street of Luoyang. It is association of pool of Lu originally, because offer sacrifices to Guan Yu and have another name called Guandi Temple, it was the ninth year of Qianlong in Qing Dynasty (1744) Build.

Existing dance building, Bell and Drum Tower, pierce through the room, corridor room, main hall, back hall, side hall in a palace or temple etc., it is a group of ancient buildings of a tightly knit structure, with unique style. Built into the west museum of Henan Province in 1981, changed into a museum of folk custom of Luoyang in 1987, opening to the outside world next year.

are various in style, the craft is exquisite. The dress is from silver only sparkling phoenix coronet, fancy cap-like cover of very beginning of dog, three inches of exquisite tiger head shoes embroidering shoes, looking with covetously eyes to embroidery art, hide the soil commoner that the wind avoided the body from rich and magnificent palace articles to old fisherman of the folk young woman in village from top to bottom, from main clothing to accessories from the inside to surface, have everything, make the outlooks of people open big.

These embroidered the product not only beautified the life of people but also expressed people s bright hope, like the common pomegranate the more sons, the more blessings, fish play with the lotus and explain and have enough and to spare etc. and borrow the pattern of an implied meaning of things year after year, can be found everywhere in these works of art.

In addition, people embroider the bat dancing lightly on the clothes, place the wish that the good fortune lowers in a multiplicity of days; Embroider elephant and vase with tall and big and big and tall image together, reflect the peaceful scene with bright, stable and happy and auspicious spring and scene.

The museum of folk custom of Luoyang has not only reproduced the custom in the west of Henan Province with the material object but also hold many kinds of folk custom activities, the content that so as to be abundant in the museum, attract guests.