Whoosh! a high speed yacht went like the wind, making a sound that smashed the viridescent sea ripple, remaining a white wave track. The yacht clinged to the surface, sometimes up and sometimes down, disappeared in the boundless sea instantly

This is a scene of the high speed yacht which is what we call Air yacht (the common name is Middle Air ), spuring on the sea. It becomes people s good coagent to gallop on the sea because of its handiness, agility and high-speed. But if it is used by the smuggler in smuggling, what will happened in the end?

Recently, Sub-Bureau of Anti-Smuggling of Dachan Customs House set out rapidly according to the intelligence, found the target Middle Air was just to pull in and unload in the water area near Mazhou River in Dongguan. As soon as possible, the anti-smuggling policemen took action to control the situation, captured two suspects who were going to flee.

Customs officers found out that the Middle Air is double-engine, five hundred-horsepower high speed yacht, the yacht carried Liquid Crystal Display TV, DVD-ROM and many other high-tech electronic products suspected of smuggling,. The cost of the case is about five hundred thousand yuan. Ten days ago, a homotype Middle Air suspected of smuggling, was captured in the water area near the Pearl River estuary.

This was another important victory of Dachan Customs after it had continuously captured six Middle Air smuggling last year.

As it was said, Middle Air was structured by glass steel boat shell, 8 metres long and 2metres wide. The yachts were all installed over two 46.48 kilowatts petrolic engine, which possess the character of light-frame, great horsepower, high speed, easily assembled and disassembled. Its speed of carring cargo could be 50 sea miles. It took Middle Air only about 20 minutes to drive from Hong Kong to the location of unloading in mainland of China. The time of unloading was short and the location often changed, which brought great difficulty to the anti-smuggling.

On the other hand, as New Year s day and the Spring festival are coming, the mainland of China extraordinarily required high-tech products. The Middle Air smuggle will increase as the smugglers were tempted by the profit of price difference.

Withal, Guangzhou Customs will take an ulterior step to adjust the power of anti-smuggle on the sea, against to the high speed, strong mobility and unloading at uncertain location of the Middle Air , strengthen inspection, and take actions such as midway ambuscade, besiege, chase, hinder and cut. Guangzhou customs will take anti-smuggle of Middle Air as the emphases of special activity of festal products smuggle, to keep the rampant tendency of Middle Air smuggle within limits. 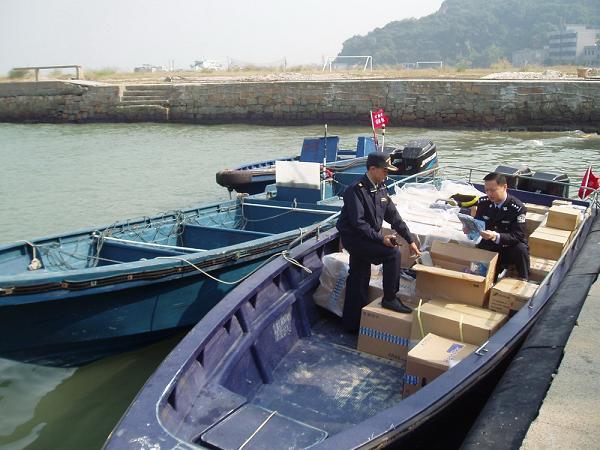