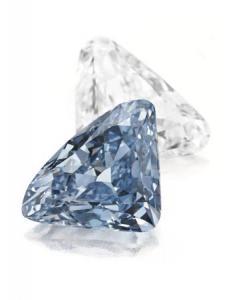 More than 450 jewelry pieces, including a rare blue diamond, should draw at least $40 million in a Christie's auction this week from buyers seeking to hedge against financial market risk.

Diamonds and colored-stone jewelry prices have shot up 20 percent from a year ago, and record prices likely will be set at this sale, Rahul Kadakia, head of the jewelry department at Christie's in New York, said in an interview.

"Jewels: The New York Sale" on October 20 features the Bulgari Blue Diamond, a two-stone ring designed in the 1970s being sold from a private European collection likely for at least $12 million. The ring, which was given as a gift from the collector to his wife to celebrate their first son's birth, was purchased for about $1 million in 1972.

The ring features a 9.87 carat colorless triangular-shaped diamond paired with a triangular 10.95 carat "Fancy Vivid" blue diamond, the largest such blue diamond of this cut ever offered at auction. One in about 10 blue diamonds of this size has a color pure enough to qualify as "Fancy Vivid."

"Ear pendants" designed by Joel Rosenthal, known as JAR, originally owned by actress Ellen Barkin and sold four years ago are being auctioned again for $300,000 to $500,000. Barkin wore the 2-3/4 inch long imperial topaz, ruby and diamond earrings at the 2005 Oscars.

"Every single client who tried to buy them back in 2006 is going to be back again," Kadakia said, adding the sales price could reach $700,000.

"We were able to secure goods from all of our top clients worldwide who wish to sell given the market," he said.

Buyers from Europe and Asia have already arrived in New York to view the exhibit, he said.

There are more than 160 signed pieces from major designers being sold by a single collector.

A special benefit sale of the most expensive Barbie doll ever made sports a rare pink diamond that matches her "peep-toe" stilettos.

The necklace on this Barbie, created for the doll's 50th anniversary celebration last year, boasts a one-carat pink diamond from the Australian Argyle mine and is expected to raise $300,000 to $500,000 for The Breast Cancer Research Foundation for Breast Cancer Awareness Month.

"They literally only produce a handful a year, so the value has been going up every single year" for these pink diamonds, said Stefano Canturi, who designed this Barbie and offers to use the diamond to create a jewelry piece for its buyer.

"The most interest we've had so far has been from pink diamond collectors. They're the ones who really want to sink their teeth into it," he said. "

Christie's said its sales of jewelry, jadeite and watches rose to $227.3 million in the first half of this year, a 75 percent leap from the same period last year.